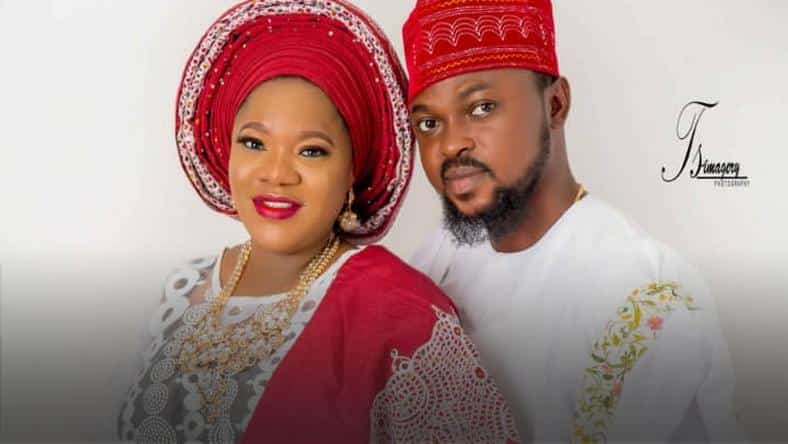 It’s no more news that Nollywood star actress Toyin Abraham has given birth to a bouncing baby boy with fellow Nollywood colleague, Hon Kolawole Ajeyemi, but not much was known about the Abeokuta based Nollywood actor, producer, and director.

Four years ago, Toyin Abraham second marriage to fellow Nollywood colleague Adeniyi Johnson, collapsed within two years of been together, but the Yoruba star actress Toyin is not giving up on marriage as she finds love in Kolawole Ajeyemi.

However, not much was known about the actor, who became popular for appearing in Nollywood movies directed and produced by practitioners in Abeokuta, Ogun State.

Ever since the romantic relationship with Toyin kicked off, Ajeyemi has grabbed the spotlight of fame, though sources revealed to us that only a few colleagues in the industry know about it.

Here’s All you Need to Know about Toyin Abraham’s third husband, Kolawole Ajeyemi.

2. Ajeyemi is widely referred to as ‘Awilo’ in the Yoruba arm of the Nigerian movie industry, where he holds sway.

3. Kolawole Ajeyemi began acting in 1997 and has since appeared in over 80 movies while directing and producing over 25 movies in the last 22 years of his career.

5. Kola Ajeyemi has a teenage daughter named Temitope Ajeyemi. Though the mother of the 14-year-old is unknown, Ajeyemi’s son with Toyin Abraham has an older half-sister.

6. The actor, director, producer, and a model cut his teeth under the mentorship of Segun Ogungbe, a popular director and son of late actor and filmmaker, Akin Ogungbe.

7. Kolawole Ajeyemi is the founder of Aje Omo Aje School of Performing Arts situated in Abeokuta, Ogun State and the brain behind Kolawole Clothings.

Kolawole Ajeyemi and His Daughter

9. Toyin Abraham got engaged to Ajeyemi, who is also the father of her baby boy, on the 4th of July 2019.

10. Ajeyemi is a fashionable Nollywood actor and Toyin Abraham’s third husband – she was engaged to Adeniyi Solanke between 2010 and 2011 and Adeniyi Johnson between 2014 and 2016.

How Ella Got Davido & Everybody Speechless With Her Own Cover of ” Blow My Mind ” Featuring Chris Brown
Wizkid Becomes First African Artiste to Hit 8Million Monthly Listeners On Music Streaming Giant, Spotify
Advertisement