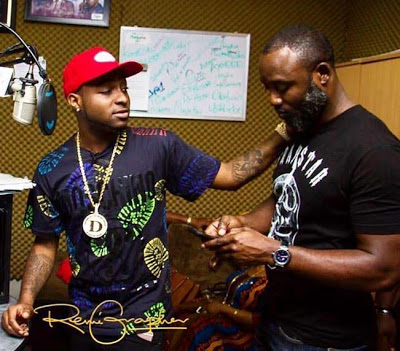 For the past few days, news has been circulating viral online and several media houses has reported the news that Nigerian pop star and music entrepreneur Davido has sacked his manager Kamal Adeboye. The music star Davido hinted the dismissed of Kamal in one of his post on Snapchat early this month that he will be managing himself in 2017 which reads,

Though at first we all thought it’s one of those joke that Davido usually pull in front of media but the situation is turning into ” mild drama ” in the camp of the DMW boss. Though, the Davido has been in front of media headlines in recent times with his performances at AFCON opening ceremony in Gabon, with his recent signing of Yonda into DMW label.

Kamal has been Davido manager for the past 4 years and he has never stayed silent like this on social media whenever anything is pooping up for Davido’s career! His last Instagram post was a photo of himself almost 3 weeks ago!

Effort to reach both party has not yielded any result but insider source close to them have something to say about situation :

‘Kamal was the one who resigned, they’ve been having this issue for a while now’.

The story got interesting last night when Davido’s hype man of many year, Special Spesh introduced a new angle to the story.

He posted a message on Snapchat that allegedly indicates Kamal uses ‘Juju’ on Davido. His message reads, ‘Kamal no go leave us no matter how hard we try! The Juju too strong’.

When Davido broke out in 2010, his first manager was Asa Asika but the parted ways on December 28, 2012 after which Kamal took over the position in January 2013.

But if history in the industry is anything to go by, Kamal and Davido may still work together in future as Davido still remains as one of the artistes under Kamal‘s  ” Twenty20 Media ” management according to their official website.