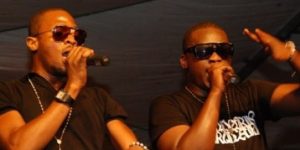 Former label mates of the defunct Mo’Hits Records, D’banj and Wande Coal finally performed together on stage for the first time after 4 years at Tee A‘s 20th Anniversary Celebration in Lagos.

The duo of Nigerian finest pop star D’banj and Wande Coal performed together at the just concluded Tee A’s 20th anniversary at Intercontinental Hotel on Sunday, they entertain audience with hits from the Mo’hits compilation album “Curriculum Vitae” released in 2007.

The kokomaster himself D’banj leave Mo’Hits in 2012, after fallen out with his former business partner and longtime friend Don Jazzy, after signing lucrative deal with Kanye West‘s ‘‘ G.O.O.D Music ”.

Music Legend 2baba Receives Huge Task from Ooni of Ife ” Its Not Your power to be Legend Today, Where are People you Started Your Career with ”
Media Move : Finest Nigerian Female Disc Jockey, DJ Cuppy Announces Reality Show On Fox Life TV
Advertisement