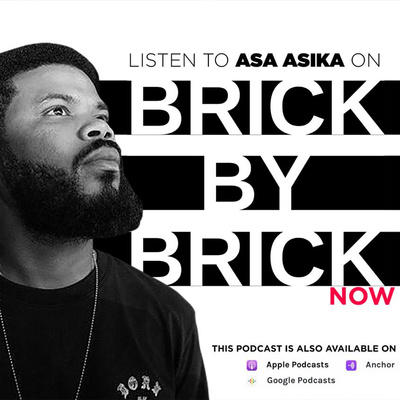 In the first episode of Nigerian US-based media personality Reni Somoye’s ” Brick By Brick ” with podcast, she had an in-depth interview with one of the Nigeria’s most sought after artiste manager, Asa Asika, whereby he talks about his journey into the entertainment industry, state of the Nigeria music industry business, his working relationship with Bizzle Oshikoya, who’s business partner and co-founder of The Plug, an entertainment management, booking and event management company.

For people who don’t know Asa Asika, he’s Davido manager, who’s arguably one of the biggest and hottest African musician’s right now, and he’s the architect behind the 2017 evolution success of Davido till today.

Asa Asika has been in the entertainment industry since his teens and has been behind some of the biggest movements in Nigerian music. This episode gives insight into his career, his journey, and the industry as a whole.

Whether you’re aspiring to work in the music industry, gain insight into the inner-workings of Nigerian pop culture, or you’re just curious to hear about how dope people do dope things – this episode is for you.

Some things discussed on the ” Brick by Brick ” podcast with Reni Somoye:

What the issue with David’s Sony deal was and how it was fixed.

How David has grown his career globally while staying true to his sound.

How Asa structures sponsorship deals for his artists.

Does Nigeria really have a music industry?

Why major labels such as Warner and Universal struggle in Nigeria.

Why making real money in the Nigerian music industry is tough.

How upcoming artist can help themselves.

Playing the long game in the music industry.

Nigeria and how to navigate the country.

Asa’s two biggest points for people who want to work in the music business.

The importance of being authentic.

Why your circle matter.

Inside View Of Multi-Million Dollar Don Jazzy’s New Mavin Records Corporate Mansion Office In Lagos
On A Thrill Of A Good Time, Davido Talks About “Shaping The Image of Africa Through Music” With Amarachi Nwosu At Columbia University
Advertisement