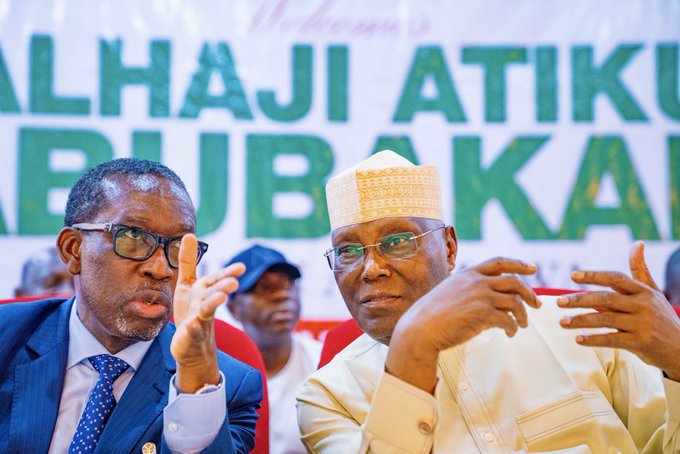 Former Vice President of Nigeria, and People Democratic Party (PDP) presidential candidate for the forthcoming 2023 general election, Alhaji Atiku Abubakar, has announced Delta State governor, H.E Ifeanyi Okowa, as his running mate. Following the announcement of Gov Okowa as running to Atiku Abubakar, opinions have decided among Nigeria political analysts, some see him as a weak choice for the ticket.

Over the past few days, Rivers State Governor Nyesom Wike has been rumoured to have been the top choice consensus candidate among the PDP’s governors with Okowa & Gov Edom coming second and third respectively.

However, as part of the party’s way of pushing everything forward to the general market, Atiku had to pick his preferred candidates among the listed names from the southern part of the country.

According to him, he reportedly said that it was a difficult decision for him of picking Gov Okowa. After meeting with the screening committee on Thursday, he declared Governor Okowa as his candidate at the party’s National Secretariat in Abuja. Governor Okowa, according to Alhaji Atiku, possesses all of the traits he seeks in a deputy.

Is Okowa The Best Choice For Atiku? As Atiku Picks Okowa as Running Mate

In his opinion, a Vice President must be able to support the President and act appropriately while he is not present. The former Vice President also stated that the party had provided him with competent options, leaving him with a difficult task.

However, powerful PDP blocs backed by Seyi Makinde, Segun Mimiko, Ayodele Fayose, and others preferred Nyesom Wike, as a strong ticket to win over the ruling party, All Progressive Congress, APC in the coming election.

However, opinions have divided among Nigerians over the choice of Okowa as running mate to Atiku, as many see him as a weaker candidate like Peter Obi, in 2019.

Wike deserves it 100% for that Presidential run. He almost won it. I wanted Okowa because he’s more “refined” but our people have said we are going for war and there’s no better soldier than Wike

I eventually bought into the Wike idea, although Okowa remained my first choice. The two major blocs in the party are Atiku and Wike, combining them would have been the perfect winning formula. Ordinary teasing him sent shivers down opposition spine yesterday.

Wike missing out on that VP ticket leaves Atiku with a lot of fence-mending to do within the PDP. It was a challenge his 2019 campaign didn’t recover from after he reportedly picked his then running mate with little or no input from stakeholders. Plenty time to mend fences though

Kudos and Respect to Gov. Ezenwo Nyesom Wike, a true and genuine party leader as well as a dogged fighter: history will have pages for this man.

Salute also to Gov. Emmanuel Udom, a quiet but powerful force in the upcoming race, a true party leader and formidable force.

This is a politically strategic ticket. Aside from Ifeanyi Okowa’s lack of glaring baggage, the choice of an ethnically Igbo politician from the South-South as running-mate is akin to killing two birds with one stone—appealing to the Igbo and the South-South at the same time. pic.twitter.com/bN3hFRrQr3

Ezenwo Nyesom Wike, with all is brashness, will be remembered as a very funny man, a man who fought a good fight in the PDP, a man who built infrastructure in his state, a man who is not a coward, and a man who doesn’t betray his political associates.

The PDP has repeatedly shown Wike, a politician of timber and calibre, that he is not good enough for them and that they can overlook him. If he leaves them for the other major party – the APC, they might appreciate him more. And he’d be reuniting with his former boss Ameachi ☺️

Okowa played a key role in the victory of Atiku at the primaries and he is a cross between the South East and the South South.
Wike strongly emerged second,commited so much in sustening the party and his ruggedness is an asset in the battle when it turns dirty.Any can be VP.