Over the past few months, since the launch of rap mogul and entrepreneur Jay-Z‘s music streaming platform Tidal, the streaming platform are finding it difficult to compete with their fellow close competitors Spotify and Apple Music.

The released of Beyonce‘s surprise 6th solo studio album ” Lemonade ” on Saturday evening, which was exclusive via her husband Jay-Z’s streaming platform Tidal and a group of artists including Alicia Keys, Rihanna, Kanye West, Madonna, Nicki Minaj, Ushe, Jack White, and Beyoncé herself.

The album was exclusive stream via Tidal, or user can pay $17.99 to download it for offline listening. Within the hours of the released of the album, Tidal shot toward the top of Apple’s App Store rankings.

Almost immediately the album goes live on Tidal, the music streaming site App downloads surged. ” Lemonade ”  went live at 10PM EST. According to App Annie (registration required), at 1AM EST, Tidal was ranked the 202nd most popular free iOS app in the United States. By 2AM EST, its ranking hit 24. It currently is the third most-downloaded free app in the US, behind only Snapchat and viral game Slither.io.

However, this isn’t the first time that single released will captured them into the top of the app store rankings. 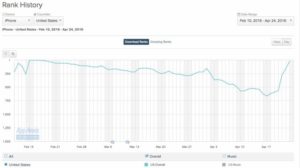 The chart below shows, Tidal was the most-downloaded free app in mid-February, when Kanye West released his ” The Life of Pablo ” exclusive on Tidal. The album was streamed 250 million times in just ten days—meaning the record received 20 million more plays than Jay Z’s top song on Spotify, “Ni**as in Paris.”

Days ago, Tidal has gradually receiving huge turn up with the exclusives right to the catalogue songs of late pop icon Prince, who die a couple of days ago.