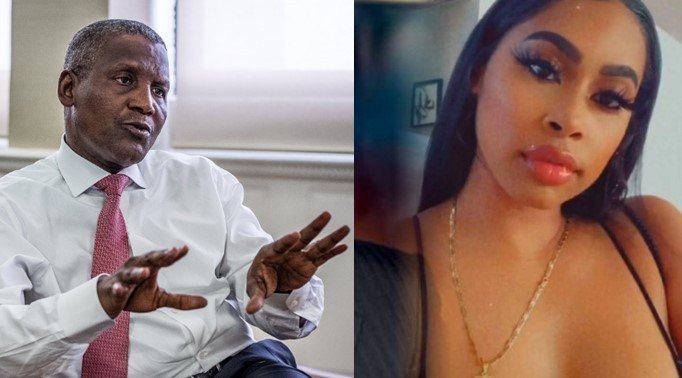 Following the alleged accusations by restaurant lady Bea Lewis, that richest black man in the planet of earth, Aliko Dangote, broke her heart into 1000 pieces, another Dangote side-chic has put petrol on the burning fire of eruption controversy, as she released semi-nude of Dangote yansh on couch.

Dangote’s latest side-chic is known as Allarounda1 on Instagram, and she shared a video of herself and Mr Dangote on a couch draped in an orange blanket fiddling with his mobile phone amidst clearly exposed buttocks.

However, the lady further tagged the previous lady, who had earlier cried out about her relationship with Dangote wrote;@iambealewis Sis come to miami let’s have fun.

She also posted pictures of the billionaire alighting from a luxury plane in a private hanger, describing herself as a ‘ForbesListSugarBabe’.

Atalanta Lady Bea Lewis Alleges Aliko Dangote Broke Her Heart In 1000 Pieces, But Here’s Lessons She Learnt From the Relationship
Bola Tinubu Is Not Positive For Covid-19 Or In France For Treatment Says His Son, Seyi Tinubu
Advertisement