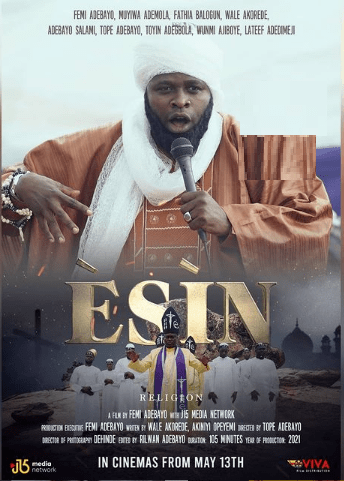 Esin by Femi Adebayo is a Nollywood movie that depicts, the emergence of a new set of believers that combine the Traditional to Christianity and Islam to confuse many people in what is called FACHRISLAM!

Esin Religion by Femi Adebayo was directed by Tope Adebayo, written by Wale Akorede, and it features stars-studded acts such as Muyiwa Ademola, Faithia Balogun, Adebayo Salami, Lateef Adedimeji, Wale Akorede, and many others.

Over the past few months, Nollywood actor Femi Adebayo has mastered the art of mimicking the Ilorin based Islamic preacher, Sheik Buhari Omo Musa, which has earned him huge followers on Tiktok, but this around he’s not joking because Esin Mi by Adebayo will hit the Viva Cinemas nationwide by 13th of May.