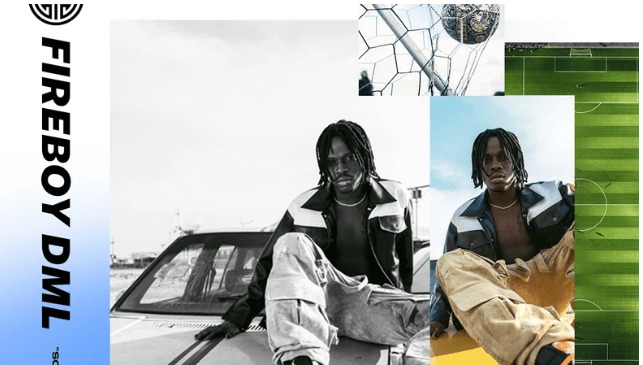 With this, Fireboy becomes the first Nigerian artistes to have a song featured on the official main soundtrack of the game. According to sources, Fireboy‘s features on the FIFA 21 game was negotiated by EMPIRE Publishing & YBNL, as the game is set for worldwide launch on the 9th of October 2020, for PlayStation 4, Xbox One, and PC.

‘Scatter’ on @EASPORTSFIFA FIFA 21, get the soundtrack playlist on all DSPs. game officially out on the 9th of October. #FIFA21 #FIFA21Soundtrack pic.twitter.com/UU5Rs3yRrU

Fireboy DML Made History As He Becomes First Nigerian Based Artist to Feature On Official Main Soundtrack of FIFA 21 Game, With Rema & Burna Boy On the Game Soundtrack

Other Nigerians who feature on the Soundtrack are Rema with ‘Beamer‘ and ‘Location’ by Santan Dave, a British rapper of Nigerian descent. ‘Location‘ also features Grammy-nominated Nigerian superstar, Burna Boy, but they are for the Volta Football aspect of the game.

Fireboy DML’s ‘Scatter’, off his LTG album has been announced as part of the official soundtrack of #FIFA21. Big deal for the musician.

So many Nigerians on there, we’re about to OWN that game for real! #FIFA21