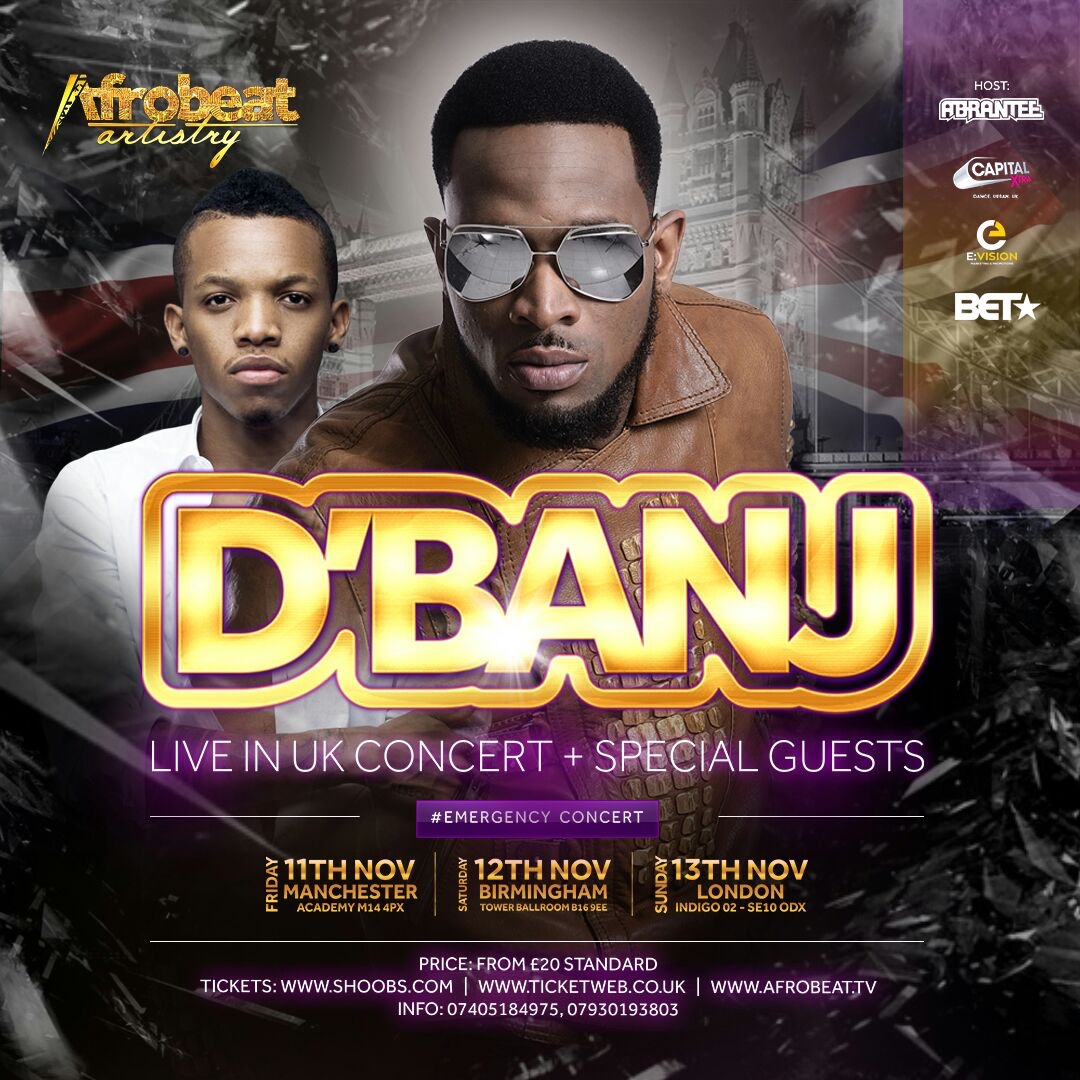 The KOKO Master himself D’Banj is back, as he returns to the UK for what will be his biggest UK nationwide headline tour, and the most explosive and star-studded Afrobeats concert tour the country has seen this year, with support from rising Nigerian Pop star Tekno, and many surprise special guests to be announced shortly, proudly brought to you be Afrobeat Artistry.
Hailed for over a decade as one of the most talented and biggest artists to come out of Africa, D’Banj’s unique style of musicianship and entertainment sets him apart from his counterparts. The Nigerian native has been leading the export of Afrobeats to the UK and America, and has succeeded in introducing the lush sounds of African Pop music, to mainstream audiences across the world.
The multiple MTV European Music Award, BET Award, World Music Award, and MOBO Award winner will be marking his return to the UK, after a four-year hiatus, with a hugely anticipated nationwide tour, which will see D’Banj performing at the Manchester Academy on November 11, Birmingham’s Tower Ballroom on November 12, and the Indigo at The 02 in London on November 13.
With a career that has spanned 12 years and over 20 million records sold, D’banj made his debut on the African music scene in 2004 with his breakthrough single ‘Tongolo’, which was released via his own record label Mo’Hits, founded alongside super producer Don Jazzy. His seminal debut album No Long Ting followed in 2005, and changed the landscape of Nigerian music forever.
D’banj’s sophomore album Rundown Funk U Up, lead by massive hit single ‘Why Me?’ came soon after, in 2006, with the Kokomaster and Don Jazzy releasing the Mo’Hits compilation album Curriculum Vitae in 2007, the first of its kind in Afrobeats. The album birthed hits like ‘Booty Call’ and ‘Ololufe’, and introduced us to future stars such as Wande Coal, Dr Sid, Kay Switch and D’Prince.
Having solidified his position as the biggest African artist in the world, and with three iconic albums – including 2008’s The Entertainer – already under his belt, D’Banj set his sights on pushing Afrobeats to the world, and signed to Kanye West’s G.O.O.D Music record label in 2011, and subsequently floated his own record imprint DB Records, in partnership with Sony Music and RCA Records in 2012.
2012 also saw D’Banj make his debut on the UK Top 10 singles chart, with his summer smash hit ‘Oliver Twist’ reaching #9 in the UK singles charts, and #2 in the UK R&B chart – making D’Banj the first ever Afrobeats artist to chart in the UK top ten! ‘Oliver Twist’ also topped the charts in Romania, and garnered chart success in Scotland, Germany, Belgium and Ireland, to mention a few.
Alongside his numerous music accomplishments and accolades, D’Banj has also dedicated his life to philanthropy and humanitarianism. He was Nigeria’s first United Nations Youth Ambassador for Peace, and in 2015, his ‘Extraordinary’ single was released to raise awareness for Gender Equality and Women’s Empowerment, and was endorsed by the World Bank.
Widely regarded as one of the best and most revered live performers, D’Banj always gives his fans and audiences an unforgettable, energetic and fun-packed live experience. Whether it’s an arena, or a stadium, or an intimate venue, D’Banj always leaves everything on stage, and with this forthcoming UK tour, he promises to deliver a live performance experience that will go down as his best ever.
The 2016 D’Banj UK tour is powered by Afrobeat Artistry, and will be hosted by Capital Xtra’s veteran broadcaster Abrantee, with support from Afrobeats man of the moment Tekno, who will be performing a slew of his recent hits including ‘Duro’ and ‘Pana’.
Credit: Press