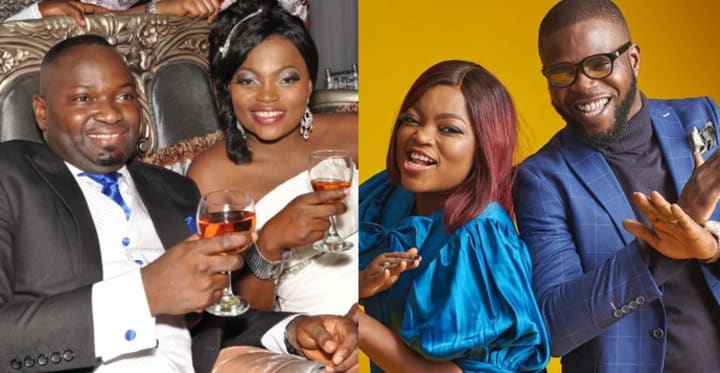 In the latest episode of Funke Akindele-Bello‘s Jenifa’s Diary of Season 24, Episode 8, she opens up with the character of Jenifa giving another character, who is beating himself up about a mistake he made, advice about mistakes.

Speaking to the character, Jenifa shared a story that I have translated from Jenifa-English to normal English for clarity’s sake. She said:

There is this celebrity, I won’t mention her name but you can guess. She always replies my DMs. She doesn’t know me o, but she’s a very friendly person that regards her fans. So there was a time in her life things went down – that time I was always sending prayer texts to her and encouraging her that everything will be okay. Because society. She married late. At that time people would always say, “You no go marry?”, even fans would comment on her posts “Go marry. Metuselah.” She got worried, and then went to marry in a hurry.

But the man had selfish interests. The man didn’t love her 100%. Yes. He tricked her into marriage, and she that was in a rush. Person wants to die meets person that wants to kill her – kpam! She was now married, by force.

Okay fast forward. Inside the marriage, she started to have a lot of ups and downs. The man would talk to her anyhow, verbal abuse. She was worried. Things weren’t going well. After some time when things didn’t go the way the man planned, he started to vex.

The man started threatening her that he would leave the marriage because she is the one that would lose because she has a name. The woman got frustrated. She would go to work and be thinking. Things weren’t going well.

Fast forward, the man then went to social media and went to write ‘My marriage to her has ended.’ The woman saw it when she was acting on a production set, it was there she saw it on social media.

She started crying, “Why would you do me like this? I have reputation. People will say why did your marriage crash? You’re a role model. Write that they hacked your account.”

In A Revealing Episode On Jenifa’s Diary Funke Akindele Tells Story of Her First Marriage, And How She Survived After Her First Crashed Marriage

He said, “Shut up. Which account that they hacked? You, I bring you down. Sheyb you want to be stubborn.”

The woman kept on crying. Endorsements, different things that she had, came crashing down. She fell back to square one.

But by the grace of God and by the fact that she allowed things to go, she got back to number one. Endorsements that they took from her came back. She was back at number one.

At this point in the story, it was still vague who the celebrity she was talking about was. Then the other character in the show said:

Wait, I think you know who you’re talking about?

To which Jenifa said:

Yes. That actress that now has twins. A boy and a girl.

She ends it with a handshake with her fellow colleagues in the character, and the description of the actress, it was very obvious that Funke was talking about herself. She then finished up her story by saying:

If she allowed her problems to weigh her down, her career would have ended. She pressed up, worked hard, prayed. If she allowed it affect her health, she would have been sick. So you see, never let anything bring you down.

Over the years, Funke Akindele-Bello has continued with her life with a blossoming career along and as well finding love with Nigerian rapper, JJC Skillz. But in a recent interview with Chude Jideonnwo, she recounted how she was able to cope with the trauma that came after her failed marriage to Kehinde Almaroof Oloyede, her ex-husband.

She further revealed how “she almost died, lost some good deals” and was able to overcome the trauma during that period.

“You know, I just wanted to get married. I want to do things right, have children and all that. And I went into the (first) marriage, it didn’t work fine. And it ended in a very bad way, in social media, the noise was everywhere. I was actually filming and somebody called me and told me, I wanted to die,” she said.

“You know I cried, lost some good deals then. But I didn’t let it break me. What I did was that I collected all the scripts from the east. I would wake up by 3:30 am, and by 5 am, I’m out to the airport, waiting for the 7:30 am flight to Enugu. That was how I survived.”

The movie star also advised young women not to feel pressured into marriage or having kids by parents or friends, noting that marriage should be driven by love and not coercion.

“Don’t have children because the society will say ‘ah she’s barren oh, 12 years, 6 years e never marry’ ignore the gossips, ignore the naysayers, give them ‘sorry the middle finger, I don’t care’. Yes, ignore because you have your life, do what makes you happy.”