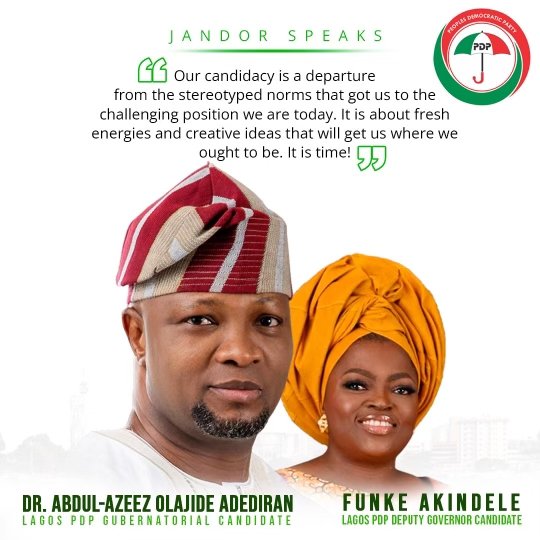 Veteran Nigerian Nollywood actress and filmmaker, Funke Akindele, has been announced as running mate to Lagos PDP‘s gubernatorial candidate in the state.

While speaking on Arise Television this morning, the Jenifer’s Daily star reportedly said she sees her selection as a huge responsibility and an opportunity to improve the welfare of the youth.

The actress said over the years, youths have been ignored while their dreams are cut short. She added that it is now time to use “our numerical strength” as an advantage in the forthcoming election.

“I’m a Lagosian born out of Ikorodu, so when the PDP gubernatorial candidate asked me to be his running mate as deputy governor in next year’s election, I saw it as an opportunity to help liberate and improve the welfare of our people – particularly the deprived youth, women and the girl child,” she said.

“My decision is not only to accept this huge responsibility but also to work tirelessly and complement Jandor’s burning desire.

“Over the years, a lot of young people have been ignored, victimised and maimed for daring to have a dream.

“So I use this opportunity to call out all well-meaning residents of Lagos – especially the youth – it’s indeed time to use our numeric strength to our full advantage.”