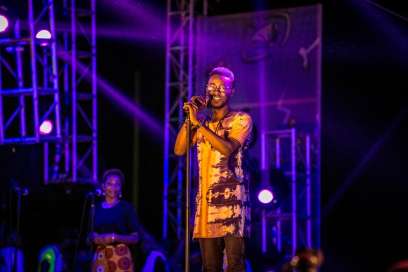 Rave of the moment singer Adekunle Gold, may soon leave his current label YBNL Nation in about a month, as soon as his contract expires from the label.

Following the departure of Lil Kesh and Viktoh few weeks ago, mainly based on mutual agreement from both parties.

Report has it that YBNL boss Olamide, has provide every artistes under the umbrella of his label with contract of 2-years and also free to go as soon as their contract expire.

According to The Herald and NET, a source confirmed the story of Adekunle Gold’s imminent departure after he releases his album in June.

“After his album drops in June, Kunle may leave YBNL to focus on his own label too”.

In another development, GY had a phone chat with Adekunle Gold representatives and its says that Adekunle is still under the label imprint and not even think of moving to another label.

Adekunle Gold at the 2016 Gidi Fest

” Thanks for confirming the report, Adekunle Gold still has an agreement with YBNL and also he’s not thinking of moving away to another label even the June that  your reports says ”.

Adekunle Gold came into limelight with releases of his hit single ” Sade ” which received massive air-plays on radio.

He followed his storytelling in his music with  ” Orente ” Omo to Loyal, and further ask baba God to ” Pick Up ” by blessing his hustle , but his latest is that he’s ” Ready ” for marriage.

We keep out fingers cross on this issue and also update you with any development.