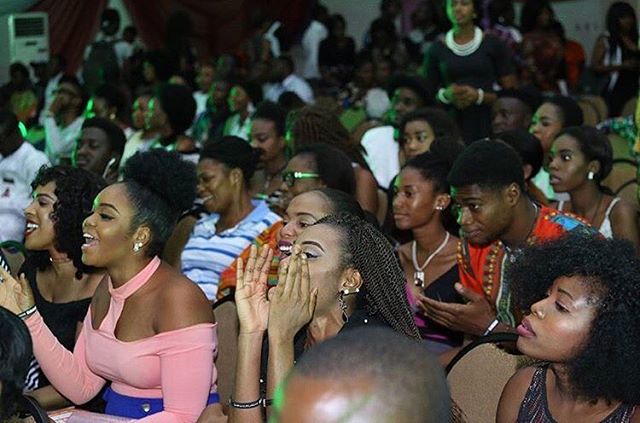 On the 1st of May, the highly anticipated National May Day Concert was held in the ancient city of Ibadan and it was a memorable outing for those people who came out for the event.

On this faithful afternoon, I broke the jinx of not going out for event. Though I’m not an introvert I just don’t like to be seen everywhere. As a young hustler chasing a dream, I flagged down a bike to take me to Mauve 21 Event Center, what surprised me most was that the Okada rider said “I don’t believe this kind of concert is happening in Ibadan” because he had only seen this kind of event in Lagos.

The concert was billed to start by 4:00PM, but our African mentality was at work for about 2 hours but in the end it was totally worth the stress.

The magnificent Mauve 21 Event Center was separated into three parts – regular , VIP for the guest artistes, media personality people at the left hand and lastly VVIP area which meant for the organizers’s friends all the way from China, USA, Lagos but all the segregation didn’t make a difference as the venue was super packed. Proximity didn’t matter, I swear it didn’t.

The stage setup was designed for artistes to just jump down to interact with the audience anytime they feel like, though stage setup was not a deal at all, but what made it less of a deal was the sound handled by Sound Genius and Guru, Edward Sunday and his Azusa Productions crew. The sound was super per excellent because Edward Sunday knew when the artists mic needed to go high and low.

After a splendid musical experience with DJ AY, who brought the house to himself by giving us what we want from the old school to the latest jam. The host of the day Shete finally welcomed us to the National May Day Concert in courtesy of BYNC Entertainment.

The Host of the Day MC Shete

The show properly began with Shete enlightening the audience on what the show stands for with a special short drama of bringing three people on stage to recite the first stanza of the Nigerian National Anthem, I bet you can imagine how it went, but DJ AY continued to entertain us with some of his mix and the rest is story.

Soon it was time for performances and Shete called on the enlisted artistes to perform on stage one after the other. Rising star Toyosi gave a wonderful performance with excellent stage coordination as she performed her debut single ” Duro “. After her performance, several upcoming artists were also given the opportunity to showcase their talent in front of the audience. Cymbals Dancers also entertained us with their dance moves and amazing dance skills, though one of the dancers wasn’t at her best, I would like to link her fatigue to the fact that they were coming in from Pastor Chinko‘s show.

Budding hardcore rapper BK GMB mounted the stage as one of the poster boy of Ibadan when it’s comes to rap music. His punchlines were on point but not so audible. He was on point but he needs to work more on how to carry the audience alongside with him even if they don’t know the songs.

Dremo Enjoying Himself on Stage

One of Ibadan soldiers and DMW’s act Dremo was called on stage to entertain us, interesting part was that Dremo knows his people and his people know him. He performed some of his hit single such as Fela, Ojere and others – for me, Dremo gave a wonderful and excellent performance and he launched us into the real concert atmosphere we were looking for.

Mayorkun Thrilled the Audience with Some of His Major Singles

His fellow DMW label mate Mayorkun was called on stage and the show of love was something else. Mayorkun had a good outing because the fans wanted him and he did not disappoint them as he sang his verse on ” Prayer “ with Davido, followed by his latest single ” Sade “ and ended it with his 2016 hit single ” Eleko “.

Sensational comedy star Woli Arole and his colleague Asiri were also called on stage. As he mounted the podium stage he said that he’s not a comedian but a prophet that wanted to proclaim powerful prophecy on people’s lives. Their prophetic declaration was so on point that people sprayed money on them. Both Arole and Asiri acted as if they owned the stage because they made people enjoy the money they paid for the show.

The Ibadan artistes didn’t disappoint us as well as.

Fabulous Pizzy a bonafide superstar; Arguably one of the biggest artist in Ibadan, came on stage and raised the tempo, performing for about 20 minutes, where he delivered his hit singles back-to-back. His presence can reminisce that a star is born but the sad part of this is that his star status in Ibadan has been unable to shine beyond the city to the Lagos market. The love that Ibadan people have for Pizzy is something else and the dude keeps raising the bar for them. He was given money on stage as if he was Fuji musician.

Next on stage was Sheun Natural. What I can say about this dude is that some how his name blow pass his music and image. Sheun Natural was unable to hold the momentum Pizzy dropped on the stage before he came on it. For me oooo, Sheun Natural had one epic disaster of a performance of the day. Another headliner that got low was Tuwyza whose performance was also poor, he was unable to coordinate the audience and his stagecraft of showmanship was nothing to write about.

The next on stage was Keanzo and his bata crew. This dude made my day with his Africana style of bata feel, his drum and African dance steps was on point. If this dude continue to grow, hack more strategy and package his style very well, he will go far performing at various African festival around the world.

The leading female artist in Ibadan music industry was call on stage, in person of Shade Blaq. Her performance was on point but my score point for her is average because she needs to work more on how to draw audience to herself whenever she’s on stage.

I experience first live performance of music reality star MTN Project Fame alumni Oyinkande and what I can say is that this dude fall my hand. Oyinkanade was unable to get people along with him on stage despite them crazily dancing to his music wherever it being played. Big shout out to Tossy Young because this dude was making fun of himself with his reggae style on stage, in fact nothing to write about him but his was also another disaster of a performance.

Man of the Day — Portah Performing on Stage

Then comes the man of the day, the man who brought people all the way from China, USA, Lagos and other parts of he world to celebrate with him. I am talking about the one and only BYNC Entertainment act Portah. The introduction was average par excellent for him as the main reason of the event but Portah was unable to keep the momentum of the introduction into his music. For Portah he might have a good outing, but for us as music lovers his performance was average and he really needs to work more on that.

According to him, he said we all came out because of him and he’s ready entertain us and also take us to the next level. Do you know who I am talking about – Legendary Afro-Juju musician Sir Shina Peters and his band team comes on stage. Baba performance can simply describes as a proverb that says ” Awon Omo Kekere won Yaju Ni ” meaning “ These children are just Trying their Best ” because I own this game and this stage. In his words, “I adore you most because you made me”, this he said before prostrating in appreciation.

Finally, Runtown the SoundGod hamoniker shut down the stage. It was already getting late, around 11PM when he was called on stage, and guests were about leaving but the moment Runtown mounted the stage, people started rushing back into the building to enjoy their own share of the ” Mad Over You “ wine.

Runtown took us on his musical journey as he performed his various hit songs such as Domot, Successful, Lagos to Kampala, Bend Down Pause, Gallardo, Wahali, Tuwo Shinkafa and Mad Over You. He had the synergy with the audience, he used the stage very well and he was quite energetic for pulling his fans to sing alongside with him. No bullshit, Runtown gave back to his fans that waited for him till that time by killing the show with an extraordinary spirit of showmanship.

Man of the show Portah, once again came back on the stage but this time around he really enjoy himself than his previous outing. The show had the presence of Nollywood stars such as Binta Ayo Mogaji, Saidi Balogun, Okunnu, Bimbo Thomas and several other money spenders all the way from China, USA, UK and Lagos.

BYNC Entertainment made history by putting together this kind of World Class Concert in the city of Ibadan, their entrance into the industry will help Ibadan because of their resource and link.