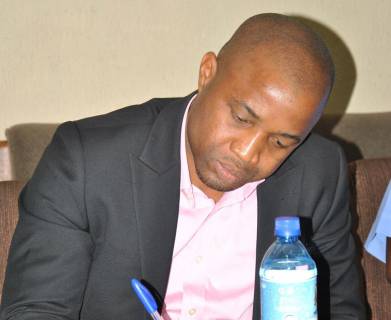 With the current situation of the country such as economy instability, devaluation of Naira, lack of social amenities, poor electricity supply, 2016 budget padding and many others, has led to many Nigerians such as Edmund Obilo questioning the administration of President Buhari has run out of excuse to deliver the new Nigeria they promised Nigerian during their campaign promises for 2015 election.

Edmund Obilo who was a special appearance at the annual Turn It Up with Big B, in Ibadan, while the audience was giving 1 minute each to ask questions aside from his personal life but once that related to his job. A young man asked him what has he ever think of running for any political office and the vocal radioman replied to the question say that he pity and envy Buhari because he wants that job. He says that this present administration has run out of excuse to deliver and he can do better than Buhari, but it’s just that he has not finished his goal for good journalism means for good governance.

He further explains the reason why he was off on radio recently: In every organization, there is some time that your view clash with the system but right now everything has been resolved for better. Based on what governor Abiola Ajimobi says that I disrespect him for not conducting that interview has been resolved.

GY Exclusive: I Envy Buhari But I Can Do Better than Him as Nigeria President says Edmund Obilo of Splash FM

He further says that he’s not going anywhere and because Splash FM ” Voices “ programme Gov Abiola Ajimobi will be live to discuss with him the state of the national affairs and the role he played in the privatization of public schools in the state.

Guys the Question now goes to You — Can Edmund Obilo Succeed than Buhari as Nigeria President?