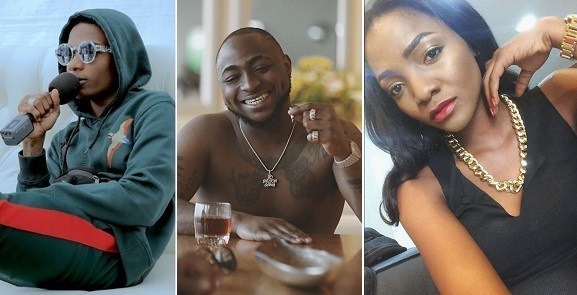 Though, both Nigerian star Wizkid and Davido keeps winning the game on their own own! But the battle for supremacy between both Sony Music acts continues to rages on.

On Sunday evening, Wizkid wins 3 awards at this year edition of AFRIMA Awards 2017, while Davido on the other angle wins MTV EMAs ” Best African Act ” and ” Best Worldwide  Act ‘‘, and fans of both stars went fenzy on internet on who’s biggest act in Nigeria as opinion were divided.

Yesterday, Davido threw major shade at AFRIMA Awards after Wizkid won three awards including ” Artistes of the Year ” & ” Song of the Year ” while he (Davido) won none.

When he eventually won the MTV EMAs ” Best African Act ” and ” Best Worldwide  Act ‘‘ Davido took to Snapchat to blast the awards, saying the plague peels..

Davido said in the video:

F-ck that shit..Omo make those ones keep their awards.Award wey dey peel.Even the one wey I collect two years ago don peel finish.My name is Davido best world wide act EMA…See you can not play me.2018,come for your head

Wizkid’s fans have come for him on social media calling him frog voice and using the frog emoji . Well, Wizkid posted the frog emoji on Snapchat and Twitter while hailing his fans as militants. He also allegedly threw shade at Davido in a previous tweet about Simi’s song writing skills.

Fans think he is shading Davido who is rumoured to buy songs from other artists.

After 4 Years without Any Featuring Collaboration, Kiss Daniel Leaves G-Worldwide to Launch his Own Record Label
5 Points To Protect Your Website From Hackers
Advertisement