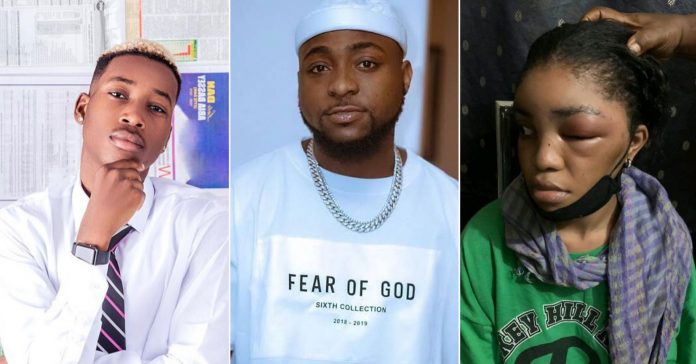 Fast-rising singer & one of the newest members of Davido Music Worldwide (DMW), Danni Goriola, known as Lil Frosh contract has been terminated by the label, following allegations of abusing his video vixen girlfriend, Gift Camille.

On Monday, 6th of October, the TV presenter & manager of Camille, Mayok Michael, called him out on social media for repeatedly physically assaulting his girlfriend.

He shared a series of photos of Gifts‘ bruised body as well as screenshots of his chat where he threatened the young lady after every act of physical abuse.

Following several attacks on DMW as a label on social media, the owner of the company Davido released statements via his social media handles on Tuesday, October 6, to address the issue with terminating Lil Frosh’s contract.

The label said domestic violence is not a matter that should be trivialized and it will never support or condone such behavior.

It added that it has conducted its investigation into the accusations and decided to immediately terminate Lil Frosh‘s contract.

DMW fast-rising rapper, Sanni Goriola, popularly known as #LilFrosh has been accused of allegedly Beating his model girlfriend, Gift Camile to a pulp.

According to the report, the allegation was made online by Camille’s Manager identified on social media as Mayoks Michael. pic.twitter.com/mvpIXplMXw

On the 24th of September, Frosh announces his termination of the contract with his former label, Aloma Music Worldwide to join Davido’s DMW.

After Downplaying the Severity of the Virus, Coronavirus Hits White House As Donald Trump & His Wife Melania Trump Test Positive for Coronavirus