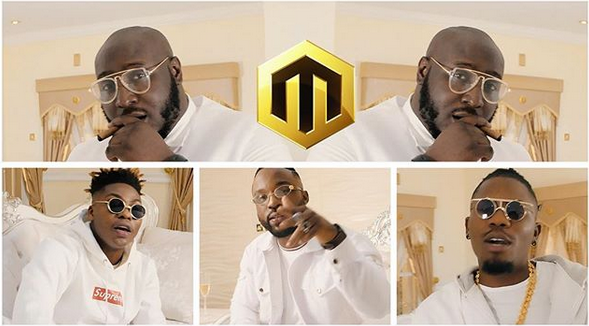 Creativity and innovations is one of the greatest weapon that makes creative people different, and we’re highly excited seeing Mavins acts bringing that to Nigeria’s music industry. The official disc jockey for Mavin Records, DJ Big N is out with new smashing single title ” The Trilogy ”, which features Reekado Banks, Iyanya and Tinny Entertainment mafia soldier Ycee. The new track ” The Trilogy ” consists of three different songs in one, and we think it’s a genius piece of work!

” The Trilogy “ track begins with a verse from Reekado Banks, where the ” Jeje ” singer sings being in love alongside with his usual fashion of Reekado, it’s great. While his part is produced by longtime collaborator Baby Fresh, which makes us question what DJ Big N‘s role is in that song, but it doesn’t really matter at this point, it’s a jam!

After one minute the beat switches up from up- to mid-tempo with an Iyanya verse, where he sings about his work proving his deserved success. Iyanya has adopted a new reggae tone which he used on his previous single “Good Vibes”, and it works well on his feel-good beat for the next minute of “The Trilogy”.

At this point, we get the gist of the song so Ycee‘s shift is a bit more seamless and the beats don’t switch up as drastically. His subject matter isn’t as clear as the others’, however, his flow is great and is a good way to close out the song.

In the crisp accompanying video, Big N, Reekado, Iyanya and YCee are wanted criminals who are being investigated by a pretty lady cop. By the end of it, they’re on to her tricks and it closes out with them plotting against her.

The video is just as engaging as the song and definitely needs more plays than one to take in the story-line and the different songs in it. We’re here for this kind of shaking the table and are shooting “The Trilogy” right up to number 1 on our playlists.

You can check it out right here: