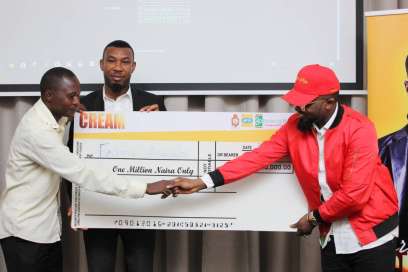 Africa and Nigeria’s music superstar D’banj‘s creative platform CREAM announced winners for the month of April. The C.R.E.A.M is a creative talent platform that was set up to help discover young creative minds across Nigeria by just dialing a USSD code on a mobile phone.

The month of April draw was held on Thursday May 18, 2017 at the Renaissance Hotel, GRA Ikeja Lagos, with guests attendances National Lottery Commission, online media company Pulse Nigeria, Deloitte Nigeria among others.

While notable personality at the event was rap star Ice Prince, MTV Base‘s VJ Ehiz, Harrysong, Jimmy Akinsola the Hypeman who also host the event. During the draw yesterday, the winner for the month of March Mr Fatoye Adeyemi was given the opportunity to select eventual winner from different categories of the CREAM platform which include Music, Videos, Showcase, Collaborations and Showbiz.

At the end of the draw, five winners were emerged from the music category, while one winner was rolled out across video, showcase, showbiz  and collaborations. The interesting that happen during the draw yesterday, was that winner from the music category also emerge as one of the five winners from the showcase category. The organisers set the record straight that the lucky contestant would have to forfeit one of the slots.

The past winner for the month of March, Mr Fatoye Adeyemi was awarded with cheque of one million naira, presented by rap star Ice Prince. However, D’banj himself was absent from the event, being out of the country for planning his next music release and upcoming tour around the world.

The kokomaster continues to make statement of empowering creatives people in the arts, music and entertainment spheres.