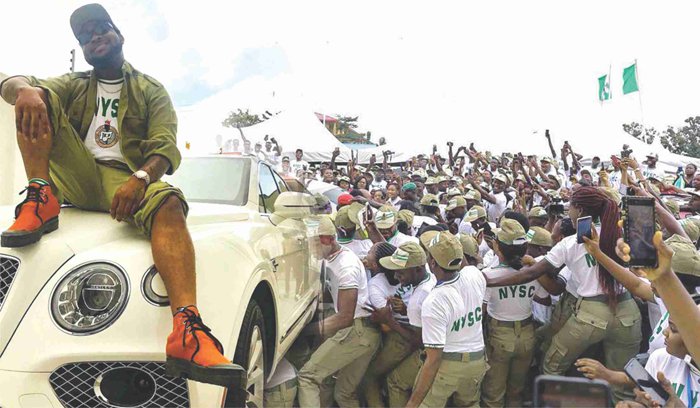 It has being an interesting and dramatic week for our favorite celebrities as most of the actions taken by them received missed reactions from the general public. However, some of which will decide their fates in major events. It’s News, But Not So News! Here Are Top Stories We’re Unable to Cover During The Week.

Here is how our week turned out:

The DMW’s boss Davido graduated from Babcock University three years ago, and he was seen posting pictures of himself before he headed to camp. His registration number is reportedly LA/18B/6389 for 2018 Batch ‘B’ Stream 2. He also staged a performance to the delight of his fellow corp members and hours later he was out of the country for his US Tour. Corper shun!!!

The organizer of All Africa Music Awards (AFRIMA) 2018 has released the nominees for this edition on Wednesday. According to nomination list released days ago, Nigeria music superstars Davido, Wizkid, Olamide, Wande Coal, Kizz Daniel, Simi, Tiwa Savage, TuFace, Falz and other artistes will be battling with their fellow African counterparts for awards in different categories. Shekhinah and Congo’s Maître Gims have the highest (seven) nominations this year while Simi has five nominations. The show has also added four categories: African DJ of the Year; Best African Dance/Choreography; African Lyricist/Rapper of the Year and Best African Act in Diaspora.

Donald Duke In support of Gay Or Not?

The former governor of Cross River State, Donald Duke has said he will not criminalise same-sex relationships if he becomes Nigeria’s president in 2019. He made the comment while appearing on On The Couch, a show hosted by Laila Johnson-Salami and Falz the Bahd Guy. “I don’t understand their sexuality,” Duke said. “But I will not criminalise them. I will ensure that they have the protection of the law.” He, however, did not state how he will make the Nigerian law, which criminalises same-sex relationships, protect people in these relationships.

Veteran Nollywood actor Jim Iyke has discredited the speculation that the management of Dana Air arrested him for assaulting one of their staff at the Lagos Airport. While he said he missed his flight to Abuja, he expressed surprise at the claim that he was arrested.

“The funny part is that this guy they said I slapped came to pick me up at the lounge and took me to the plane. He got me a better seat, and I gave him a little change because I know the country is hard, ” he wrote.

Pendulum: How Saraki Plans To Defeat Buhari in 2019 by Dele Momodu
How to Prepare Pepperoni Pizza at Home Within 45 Minutes
Advertisement