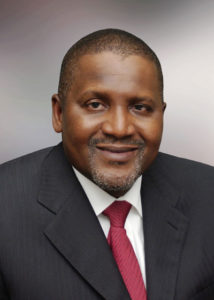 Valued around $17.3 billion and owning Africa’s largest cement production company, business mogul and Founder & CEO of Dangote Group, Aliko Dangote has been linked with the leaked  Panama Offshore properties that is talking the world at a storm.

According to report Panama based law firm Mosseca Fonseca and given anonymously to German company Süddeutsche Zeitung and then to International Consortium of Investigative Journalists (ICIJ), with Premium Times Nigeria being the only given the exclusive document reported that Aliko Dangote, Suyya Dantata, and other of the billionaire’s relatives have been linked to shell companies in tax havens.

Here’s what Premium Times, the only Nigerian media house involved in the analysis of the leaked documents said:

Mr. Dangote, alongside his half-brother, Sayyu Dantata, the founder of MRS Holdings (a leading West African oil-marketing firm, which acquired Chevron-Texaco’s downstream assets in 2007) bought equal shares of 12,500 each from OVLAS S.A, a shell company registered in Seycheles, on October 6, 2003.

According to the documents, three years after they existed as shareholders of the company, the trio – Dangote, Dantata and M.R.S Oil and Gas Company Limited – ceased to be shareholder in the company. That was on April 12, 2006.

But in an arrangement that seems curious, Mr. Dangote was issued a higher amount of shares – 250,000 – on the same day he resigned.

In the same manner, his brother, Mr. Dantata, was issued the same amount of 250,000 shares. That means the businessmen simply resold the shares back to themselves. Their company, MRS Oil and Gas, was re-issued 500,000 shares.

After three years of holding the shares, they all ceased to be shareholders. Again, they resumed possession of the shares as in the previous time, but this time it seems Mr. Dangote sold his shares to Mr. Dantata and M.R.S Oil and Gas Company Limited.

Before Mr. Dangote ceased to be shareholder of M.R.S Oil and Gas Limited, himself, Mr. Dantata and their co-owned company, M.R.S Oil and Gas Co. Limited, was used to buy shares in Petrowest S.A, another company registered in Seychelles on October 6, 2003.

Messrs Dangote and Dantata bought equal shares of 12,500 each from Petrowest S.A, MRS Oil and Gas Co. Ltd also bought 25,000 numbers of shares from Petrowest, just as was done with OVLAS S.A.

Again, three years after they existed as shareholders, the trio – Dangote, Dantata and M.R.S Oil and Gas Company Limited ceased to be shareholders in the company. That was also dated April 12, 2006.

Like in the case of Ovlas S.A, Mr. Dangote suddenly ceased to be shareholder. According to documents available to PREMIUM TIMES, on the same day, Mr. Dangote was re-issued a higher amount of shares – 250,000. In the same manner, his brother, Mr. Dantata, was issued the same amount of 250,000 shares. This literary means they resold the shares back to themselves. Their company MRS Oil and Gas was re-issued 500,000 shares.

In what appears a plot to blur the trace to the Ovlas in Seychelles, the shareholders quickly filed for a change of name to Petrowest S.A.

This is to certify that OVLAS SA. has changed its name and is now incorporated under the name of PETROWEST S.A. on this 27th day of April 2011. Given at Victoria, Seychelles.

Responding to PREMIUM TIMES, Dangote Group’s spokesman, Tony Chiejina who debunked the the claims in the papers said,

I wish to state categorically that neither Aliko Dangote nor Dangote Industries Ltd (DIL) has any form of relationship with these alleged four off shore companies. The Group has four quoted companies on the Nigerian Stock Exchange and we cannot afford to tarnish our reputation or conduct our business in an unethical manner given this profile.

Our reputation is paramount to us and we are conscious of the downside of it. We thank you for upholding the principal ethics in journalism – ‘when in doubt, check’.

#BringBackOurGirl : Who is Fooling Who? Gov Ayo Fayose Claims No Chibok Girls Are Missing
Am Not Finished with Nigeria ” I Only Retired But Not Tired ” — Ex-President Goodluck Jonathan
Advertisement