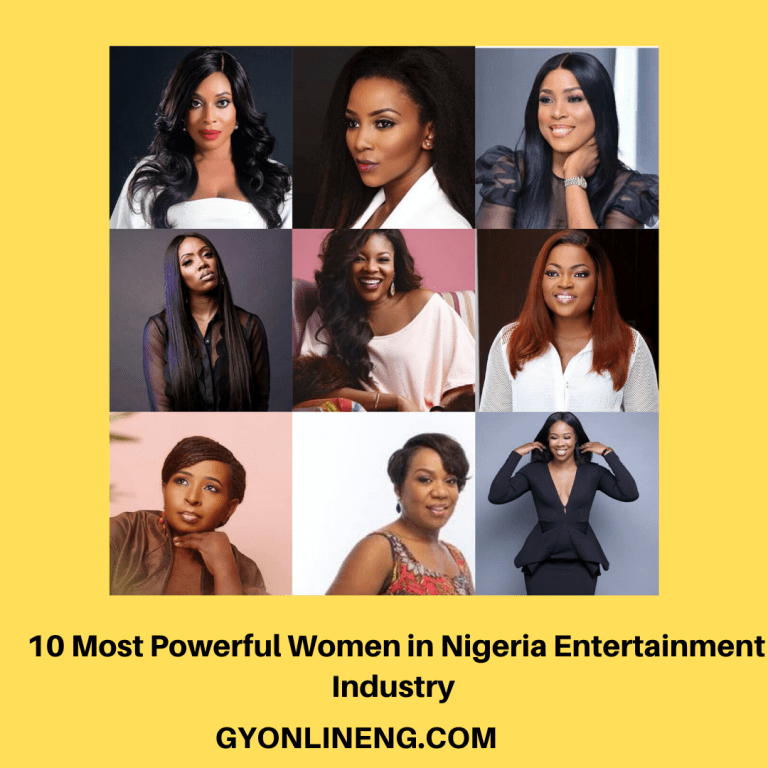 Every 8th of March is International Women’s Day, although it’s not a public holiday, it’s a day we use to celebrate the power of women in our society. What a moment to celebrate women of honor that are doing an outstanding and extraordinary job in their various choosing careers, which has impacted the growth and greatness of humanity.

‘’ A strong woman builds her own world. She is one who is wise enough to know that it will attract the man she will gladly share it with ‘’ Ellen J. Barrier.

And as we celebrate International Women’s Day, it’s our job at GYOnlineNG.COM, to curate and celebrates 10 Most Powerful Women in Nigeria Entertainment Industry; these eminent individuals are changing the narrative in the males dominated industry.

However, for these eminent individuals, power might be in the form of success, prestige or aspiration to elevate the industry to the next level.

Before we delve in:

What Is Power? It’s the ability or capability to direct or influence the behavior of others or the course of events.

This now brings us back to the article, over the past few years the Nigerian entertainment industry has moved beyond a questionable product into a lucrative sector that has attracted millions of dollar in investment from the international shore.

Without any further ado, based on the reputation they control, and with their status in their respective industry, GYOnlineNG.COM presents to you ‘’ 10 Most Powerful Women in Nigeria Entertainment Industry ‘’.

If we’re talking about the rise of Afrobeats and Nollywood content to the world through the millions of streams Nigerians creators are gathering on video streaming giant YouTube, the effort and strategy movement of Addy Awofisayo, cannot be neglected.

Who’s Addy Awofisayo, she’s Harvard-trained YouTube’s Head of Content Partnerships for sub-Saharan Africa, and she had played a vital role in pushing local creator contents in the front of the final consumers through various in-house DIY by YouTube.

Osigwe is a Nigerian media mogul, filmmaker and entertainment executive who has been called “The Queen of Nollywood Films”.

This list is incomplete without mentioning Veteran Nigerian actress and filmmaker Funke Akindele-Bello, whose career in Nollywood has spawned over two decades in the industry.

The consistency of Funke Akindele, popularly known as Jenifa through her 2008’s ” Jenifa ” movie is a force that you’ll love to reckon with, and influence has since stretched from just in front of the camera to behind it.

The writer of this post described her as Oliver Pope of Africa Music Business, I mean the fixer of the American TV series movie ” Scandal ”. Vanessa Amadi is Nigerian PR guru, CEO & founder of VA PR & Stealth Management, and she had worked with African biggest stars such as D’banj, Genevieve Nnaji, Tiwa Savage and Davido.

She’s an expert in media and business strategist, and she’s dedicated to creating entertainment content that attracts the African audience by Africans hence her passionate approach to Africa Magic originals (feature films and Series).

When you’re talking about online media or blogging business in Nigeria, the name Linda Ikeji will surely top-up on any presentation or discussion. Her success & influence over the past 13 years in Africa’s online media space can never be overstated.

Africa’s Blogging Queen, Linda Ikeji started blogging in 2006, when Nigeria is yet to internet savvy, and with her dedication and persistence over the years eventually paid off in a few years as she became one of the most powerful persons in the media.

However, the influence of her blog might have waned over the past few years, but Linda Ikeji remains a force with the diversification of her media company.

Her first ever directorial movie ” Lionheart ” was acquired as a first original movie by Netflix and the first Nigerian film to be submitted for Oscar consideration this year.

Kemi Adetiba kick off her career in the entertainment industry from radio presented to TV host to music video director and now a filmmaker, where she’s regarded as one of the influential figures in the Nollywood industry. In her early music video career year, she’s credited for music videos such as Niyola ‘Toh Bad’, Waje’s ‘Onye’, Tiwa Savage’s ‘My Darling’ and many others.

In 2016, Kemi Adetiba‘s director movie ” The Wedding Party ”, becomes one of the best Nollywood’s highest-grossing films. She followed up her directorial career in filmmaking with her critically acclaimed movie King of Boys in 2018, and it was a huge success as it grossed N244,011,753 as the 5th highest-grossing Nollywood film.

She was selected among groundbreaking women in the entertainment industry around the world for Netflix & United Nations Women initiatives ” Because She Watched ” to celebrates International Women’s Day recently.

Without any sentimental view or angle, Tiwa Savage is arguably one of the biggest female artists in the Africa continent. Her hardworking, dedication and persistent to her craft have made her stand out among her peers in male-dominated Nigeria’s music industry.

Despite slow outing in 2019, Tiwa Savage continues to show herself as the poster Stargirl of Africa music with her lucrative contract with Universal Music Group last year.

She has multiple hit songs with local and international awards under her belt, she’s a symbol of hope for every aspiring young girl in Africa.

Forget blasphemy, this compilation is incomplete without Mo Abudu on it as number one, and she’s regarded as Oprah Winfrey of Africa. Following a successful career in the corporate world, Mo Abudu decided to launch her show tagged ” Moment With Mo ” in 2006, and 25 years later she later launched her own entertainment and media company, Ebony Life TV.

After the success of her company, she introduces a new product called Ebony Life Films, and the company has produced some of the biggest Nollywood movies in recent years like Wedding Party 1&2, Chief Daddy, Your Excellency and so forth.