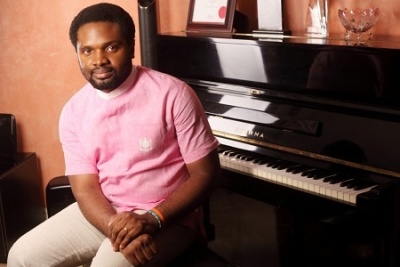 Veteran Nigerian musician and production genius Cobhams Asuquo, speaks on how music found him, growing up blind, his childhood experience, Sony deal, Asa , state of Nigeria music sound and others with Flytime TV .

The ” No Hold Barred ” singer talks how he dabbed into music, not feeling being left out during his childhood days, he got to feel the happiness with video games, and other fun stuff his peers enjoyed growing up.

He further speaks on how his friend stole his sister’s piano for him, how he played with the guitar well to his own tune, and other instruments and learnt to play that way.

On people who gave him a chance, Cobhams credits Big Bamo for letting him work on production of Maintain’s ‘Catch cold’ hit single.

“Everytime I slept in the studio, I dreamt of being in my own studio, For me it was just holding on to that dream and working towards it, that was the most important thing”, the producer recounts about his hopping and sleeping in from one studio to another.

Production Genius Cobhams Asuquo, Speaks on How Music Found Him, State of Nigeria Music to be Very Intentional About the Science of our Music and Many Other

Speaking of working with Asa’s debut album, and if he thought the project was going to be that successful, Cobhams replies saying he knew Asa was going to emerge a great artist. He comments that they both gave it their best to satisfy themselves.

His take on the  state of Nigerian music comparing to over a decade ago has been very significant, as the rest of the world is paying attention.

“We need to be very intentional about the science of our music, music is an important factor”, Cobhams explains.

[ctt template=”5″ link=”aS9Pk” via=”no” ]Production Genius Cobhams Asuquo, Speaks on How Music Found Him, State of Nigeria Music to be Very Intentional About the Science of our Music and Many Other[/ctt]

Advising other people living with varying degrees of disability, Cobhams says they should believe enough to give themselves a chance.

“It’s worth taking a chance, the worst that could happen is you will fail at it, but you‘ll get better  and then you learn, and help pave a way for someone else,” the music genius says on a final note.