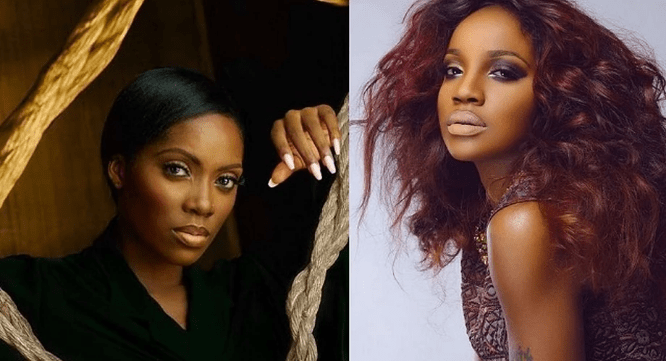 On the 8th of June, 2021, we reported to you about how the duo of Nigerian female music superstars Tiwa Savage and Seyi Shay fight dirty with each other at a Lagos-based hair salon named Tayo Cuts. In the viral video obtained by Tunde Ednut had both music stars been on loggerhead with each other over the unsettled beef.

According to the report, around 11 AM yesterday, Seyi Shay entered the hair salon, and she could feel the heat as she enters the salon because of Tiwa Savage‘s presence as well. Their eyes met and Seyi went ahead to say hi to ease the tension, but their mutual presence at the salon was uneasy because of their long-time beef.

Seyi Shay accused Tiwa of trying to get her kicked off endorsement deals and also fighting another artiste for featuring her on a song amongst other things.

Shay was in America when she saw a video of ‘Lova Lova’ featuring Duncan Mighty pop up on her television screen. Surprised alongside members of her team, she placed a call to Tiwa Savage to clarify her stance. She had co-written the song with Nigerian singer-songwriter, Ceeza Milli who passed it to Savage without prior notice.

Shay claims that she only asked for metadata and rights to the song but she was confronted by roadblocks. In 2014, Shay had butted heads with a pregnant Savage.

In the same audio that Pulse obtained, Shay says that Savage threatened to sue a brand if she [Shay] wasn’t pulled from an ambassadorial role. She further says Savage also allegedly picked a fight with a popular male artist for featuring on a song for the two female artists respectively.

According to the Murder crooner, it hurt her because she once had a miscarriage.

“It hurt me because I’ve had a miscarriage before and I know the kind of pain that I felt when going through that so, for another woman not only to skin-shame you but to now tell you that God will not give you a child, that you’ll not have a child.”

With what happened at Tayo Cuts in June 2021, Seyi Shay feels like she could have said more damaging things in the verse.