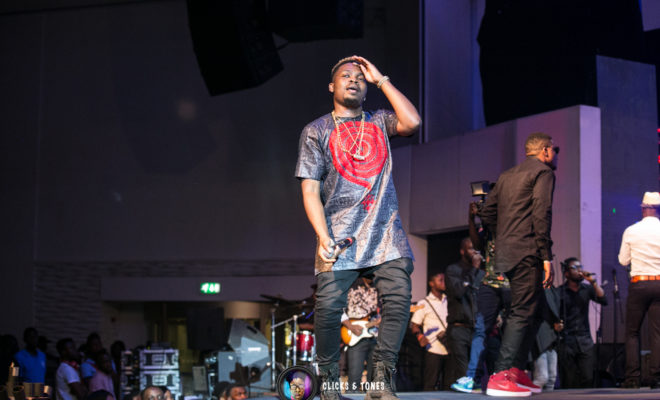 The annual Olamide Live in Concert — OLIC 3 was held on Boxing Day, and the event has gradually begins to be the talk of the town story as Olamide once again displayed his artistic genius in front of over 7,000 audience with another over 700 hundred fans who are unable to enter the event main show auditorium.

The OLIC concert started in 2014, and ever since then it has begun to be avenue whereby Olamide used to show appreciation to his fans and also to promote his craft in the presence of his beloved fans, which has being hit back-to-back ever since the exemption.

This year once again, Olamide shows his dexterity as biggest and only rapper that can shut down Eko Hotel ( MI with collaborative effort from 2baba almost try to shut down the auditorium, but Baddo did it once again ), though he has once bragged with it in his November 2015, hit single ” Eyan Mayweather “ about shutting down Eko Hotel with line ” When anybody wants to talk about rapper or whatever, go shutdown Eko Hotel first “.

With current success of Olamide shutting down the Eko Hotels once again, it’s right time for him to move his show into a bigger venue in order for his beloved fans to enjoy his craft, while moving his show to stadium is the next hurdles he needs to break.

In short Olamide has outgrown the Eko Hotel venue, he should move into stadium for his next show. While, the Lagos State boast two of the biggest and finest stadium in Nigeria – The Teslim Balogun Stadium which boasts capacity of 24,325 or even more, while the Lagos National Stadium can accommodate 55,000 fans for him.

Without any bias Olamide had more commercial influence than this two great African rapper, which means it will be very easy for him to achieve that feet. What he and his team need to do is to come up with plan for the security of life and property of the people attending the show, and with recent romance he had with top politicians such as Bola Ahmed Tinubu, Gov Ambode, Senator Dino Melaye, Ex-Gov Babatunde Raji Fashola and many others he can achieve that feet for his next show.

It’s time for Olamide to forget the Eko Hotel filled up show and move his show into large stadium like the once listed above.