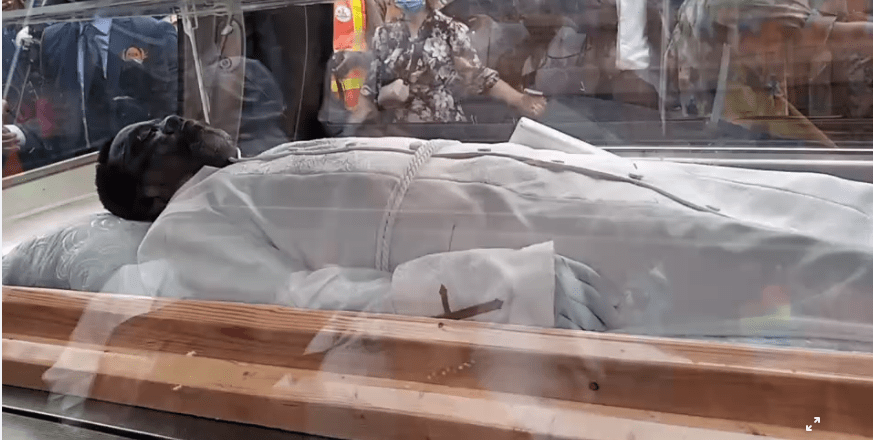 Nigerian televangelist and founder of Synagogue Church of All Nation (SCOAN), Prophet Temitope Balogun Joshua, popularly known as TB Joshua, was finally laid to rest hours ago, after a long week of funeral rites at the church premises in Ikotun area of Lagos state.

On the 5th of June, T.B Joshua was pronounced dead, after a brief illness. His death was shocking to millions of his followers because it’s about a few days to his 58 birthday anniversary.

On Thursday 8th of July, his body was brought into the church premises during the lying-in-state service with activities tagged: ‘Celebrating the Life and Legacy of Prophet Joshua (1963 to 2021)’, which was watched by many across the world.

However, TB Joshua was buried today in the presence of his widow wife, Evelyn; his three children, Serah, Promise, and Heart, disciples, and family members witnessed the burial. His ministry professed to heal all manner of illnesses, including HIV/Aids, and attracted people from around the world.

Rotimi Akeredolu, governor of Ondo state, and Babajide Sanwo-Olu, his Lagos counterpart who was represented by Olanrewaju Elegushi, wife of the Ooni of Ife, Olori Naomi Adeyeye, and Lagos state commissioner for home affairs, also graced the event.

Akeredolu visited the church alongside Lucky Aiyedatiwa, his deputy, to honour Joshua, an indigene of Ondo state.

Other dignitaries at the event include Hakeem Odumosu, Lagos commissioner of police; Samson Ayokunle, president of Christian Association of Nigeria (CAN) who was represented by Biodun Sanyaolu, the general secretary of CAN.

His wife, Evelyn Joshua, who has now been appointed the general overseer of the church, said her late husband grew the church from an eight-member assembly to what it is today.

“For gold to become gold it must pass through fire. I just want thank you for being a good father to our children,” she said at Tuesday’s all-day tributes service.

His children, Sarah Joshua, Promise Joshua, and Heart Joshua, described their father as “a man with a formidable dedication”.

However, other popular Nigerian mega-pastors were missing from the week of memorials, highlighting the frosty relationship he had with them.

Christian Association of Nigeria (CAN) and Pentecostal Fellowship of Nigeria (PFN) previously described him as an “impostor” who belonged to a group of “occults” that had infiltrated Christianity.

Joshua was revered by people from around the world and tens of thousands of people attended his weekly services.

The charismatic preacher’s rise to prominence in the late 1990s coincided with the explosion of “miracle” programmes performed on Nigerian TV by various pastors.

His ministry professed to heal all manner of illnesses, including HIV/Aids, and attracted people from around the world.

Known as the “Prophet” by his followers, he ran the Christian television station Emmanuel TV and often toured Africa, the US, the UK, and South America.

Joshua came from a poor background and was brought up by his Muslim uncle following the death of his Christian father.