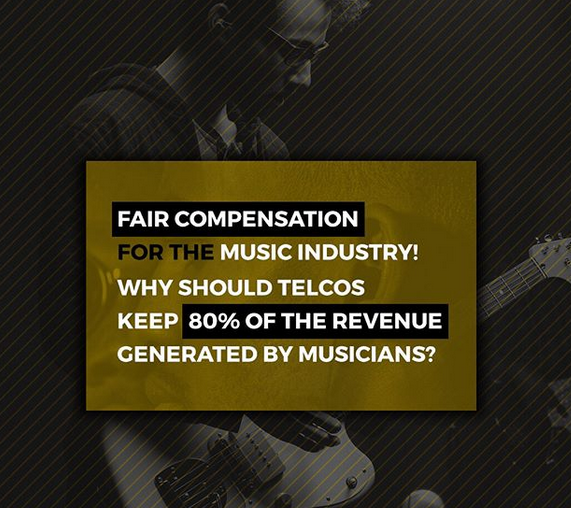 Regardless of what you legally do for a living, as a working-class person, you can imagine the feeling of pain and frustration when you do not get rewarded for your hard work, or worse, when other people enjoy the full benefits of your sweat, blood, and tears, while leaving you with next to nothing. That’s the exact feeling a musician will have after realising that all along, he/she has been losing out on revenue that should, by law, be rightfully his.

In a not-so-new but ever-terrifying reveal, CEO of Chocolate City Group, Audu Maikori, took to Instagram to lament about how badly the telecommunication companies in Nigeria are seriously ripping artists off in a post he captioned;

You may not know this , but majority of music sales revenue in Nigeria is generated by the sale Ring back tunes/ caller tunes. Sadly the telcos agreements make Majority of the artists ( aside from the really big names/ labels) collect average around 70/80 percent of the revenue while the artists labels keep averagely around 20/30% . In recent times the best case scenario is they do a 50/50 deal ! For example In 2016 one of the Nigerian telcos admitted that they made $80million dollars from ringtones alone!! Meaning the whole industry ( artists, songwriters, labels etc) only shared about $ 20 million or so collectively! Granted the telcos have played a key role in promoting the Nigerian music we now enjoy but we need fairer terms to ensure that the actual creators/promoters of the content can at least recoup and make money to funnel back into creating more music and more jobs/ careers. The only way to do this is to revise the rates and make sure the rates are applied across board regardless of the telco. At the House of Representatives adhoc hearing on the 30th Of November 2017- It was found that the law stipulates a sharing formula of 70:30 in Favour of the content creators . We want those terms to be adhered to so that we can continue to grow the industry by ensuring that it’s makes commercial sense .As it is written, so let it be DONE!!! #AdhocHearing2018 #musicindustry #nigeriamusic

You can’t help but weep for our artists/producers/songwriters and everyone, who put in work in the studio to make a song come alive, only to be left with absolutely nothing because some telecommunication companies have taken it upon themselves to enjoy the bulk of their reward. With saddening figures like that, it’s clearly a case of ‘Monkey dey work, Baboon dey chop’. The kind of scam that one wouldn’t believe possible from the outside looking in.

In a 2015 post, it was reported that Globacom and MTN generated over N9bn in revenue for artists through Caller Tunes. However, with the information that has come to light, there are a lot of things about those figures that actually do not add up. Let’s wear our mathematics cap for a few seconds here: if the telcos paid the artists N9bn as their 20% cut, then that means the telcos actually generated N45 billion and went home with combined N31 billion as their 80% share.

Excerpt of the 2015 post gotten from Nigerian Communication Week

It’s really messed up, no matter how you decide to view it. Artists like Ruggedman and D’Banj have lamented over time about how telcos are ripping musicians off and how, even though the Senate passed a law that states, ‘revenue sharing should be 70% for the artist and 30% for the distributor,’ the telco giants have taken it upon themselves to not follow the law and swim in the corruption that we are trying so hard to end.

After streaming companies helped to curb the piracy disease that plagued the entertainment industry for years, it’s sad to know that the reward for not having to deal with piracy is to lose a staggering 80% of your income.

It is actually high time Senate intervenes and gives a lifeline for artists to thrive and get rewarded for their work. If Caller Tunes is able to generate that amount of money in a year, then it’s clear that there is a serious demand for it and one that every artist (upcoming or seasoned) can actually tap into to make money from. Such laws of 70/30 revenue sharing are already implemented and working in countries like America, Canada, and even in the United Kingdom, and we definitely need one now more than ever.

Music Premiere : Olamide Continues His Dominance With Another Street Lamba! Download Olamide – Science Student (Prod. Young John x BBanks)
Here’s What Ubi Franklin Has To Say About Fans Who Ask Him How He Made His Money
Advertisement