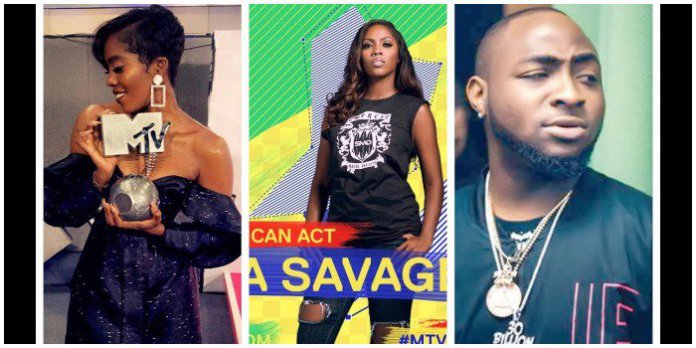 Mavin Records act and First Lady of Pepper Stew Association, Tiwa Savage wins 2018 MTV Europe Music Awards (MTV EMAs) for the ” Best African Act ” category ahead of other heavyweights in Africa continent such as Davido from Nigeria, duo of South Africa’s stars Distruction Boyz and Shekinah; Kenya’s Nyashinski and Fally Ipupa from the DRC of Congo.

The annual MTV EMAs held last night at the expansive Bilbao Exhibition Center, Bilbao, Spain, amidst glitz and glamour, awarding music artistes around the globe in different categories. The African act category was infused into the MTV EMAs to enhance musical alliances across borders, and promote cultural integration.

While speaking with correspondent of The Nation on the Red Carpet, Tiwa Savage was full of accolades for the DMW‘s boss Davido whom she proudly called by his alias; O.B.O. The Nigerian songstress Tiwa Savage in June this year, lost to Davido for the Best International Act category of the Black Entertainment Television (BET) Awards.

The ” Malo ” singer was highly delighted by her first-time experience in Bilbao, Tiwa Savage simple said she loves the Spanish food, while also describing the award organisation as ‘incredible’. She further says that she humble to be nominated in the same category alongside with Davido and Fally Ipupa from DRC of Congo.

Almighty God, you ARE so faithful. My savage soldiers you did this for us. You’ve stuck with me through the roller coasters, THANK YOU To my amazing team, this is just the beginning. African Woman, this is for US I’ve been through a lot but I’ve kept my head up and weathered the storm because I know some little girl somewhere is dreaming like I did. ❤️❤️❤️❤️❤️❤️❤️❤️❤️

After 18-Months Of Operation, Kwese TV Shut Down Satellite TV Operation
2Face Idibia In Tears As His Wife Annie Idibia, And His Baby-Mama Pero Adeniyi Ended their Age-Long Rift
Advertisement