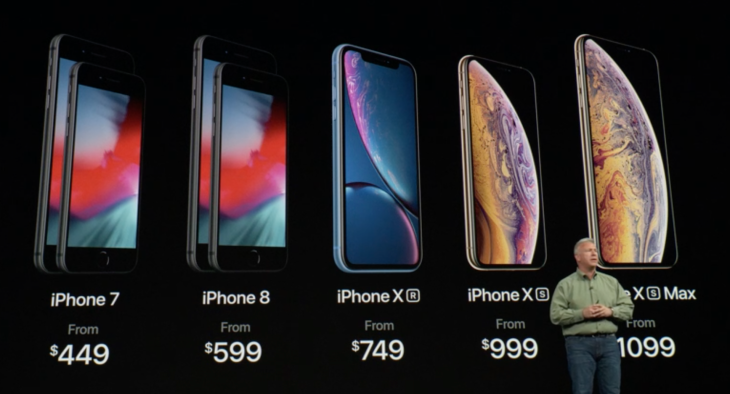 Apple has launched the new iPhones (iPhone XS and iPhone XS Max) at its Cupertino headquarters in California on 12th September. The company with a market capitalisation of $1 trillion also unveiled a relatively affordable iPhone: iPhone XR. So, for those who missed the event, Jumia, Nigeria’s No.1 shopping destination, highlights some of the key announcements.

For the event, Apple launched three new main versions of the iPhone including iPhone XS, XS Max and a third phone: iPhone XR. These iPhones are sleek, sophisticated and you will definitely get value for your money. Below are the key specs for the new phone:

The iPhone XR is a bit similar to the iPhone 5S. Coming in at $749 to start, it’s not exactly inexpensive. It is, however, comparatively less expensive than the iPhone XS ($999). It’s also, size-wise, directly in between the new iPhone XS and XS Max, the iPhone XR has a 6.1-inch LCD screen.

The LCD bit is important because it’s part of the reason the XR costs $250 less than the XS. The iPhone XR is internally nearly identical to the more expensive XS and XS Max. It’s got the same A12 Bionic chip, powered by the same supporting hardware. It’s got a similarly powerful battery that should carry most users through at least one day of use.

It loses 3D Touch, perhaps another measure of the LCD screen and it only has one of the two 12 megapixel cameras found on the back of the iPhone XS and XS Max. But, it has one incredible feature that neither the XS or the XS Max has: It comes in yellow.

If you’re in the market for an Apple Watch, and you’re looking at the Apple website’s comparison page trying to make up your mind, it’s hard to argue with hard numbers: The Apple Watch Series 3 is $120 less expensive than the equivalent Series 4, and it’s nearly identical. Better still: It’ll get the update to WatchOS 5 when the new software arrives next week before the Series 4 is even available.

There are two new versions of the Apple Watch in two new sizes: 40 and 44 mm. The screens are 30% larger, according to Apple and they stretch further to the edges than ever before. The Apple Watch Series 4 is an update, but not a major one. It’s got a new, more powerful chip (the “S4”) at its core that promises “up to two times better performance.” The accelerometer has been improved to detect drops and can auto-dial emergency services when necessary.

With iOS 12’s arrival next Monday, September 17, Apple is making some major upgrades to its mobile operating system. Perhaps most importantly of all, iOS 12 brings a major boost to older iPhones: 40% faster app launches, 50% faster keyboard pop-up, and a 70% speed increase in camera opening. In short, it will make older iPhones feel new-ish again.

Continue Reading
Advertisement
You may also like...
Related Topics:Apple, iPhone