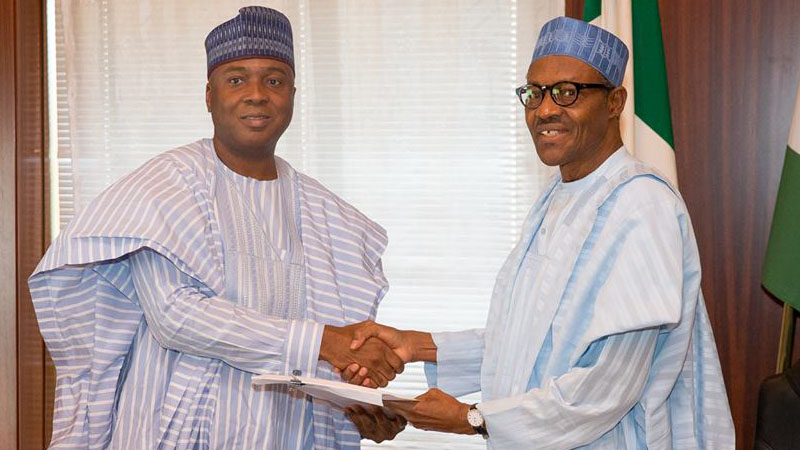 The 8th Senate President of the Federal Republic of Nigeria, Dr Bukola Saraki has finally revealed the reason why he’s against the leadership of President Muhammadu Buhari led administration.

The highly powerful politician Bukola Saraki made this revelation why addressing his followers in Ilorin, Kwara State. He stated that he invested a lot of money in the 2015 campaign of Buhari, but he did not benefit anything from the administration.

If you don’t forget that Saraki alongside with five PDP‘s governors such as Rotimi Amaechi (Rivers State), Rabiu Kwankwaso (Kano), Murtala Nyako (Adamawa), Abdulfatah Ahmed (Kwara) and Magatakarda Wamakko (Sokoto), dumped the then ruling party PDP for the newly floated All Progressive Congress (APC) in 2014, and recently part ways with the APC alongside with some other Senators such as Shaba Lafiagi, Mohammed Ndume, Danjuma Goje, Abdullahi Adamu, Magnus Abe, and Wilson Ake with the PDP.

In an audio recording of his Saraki’s address to his followers, he noted that the three and half years of the Buhari government have not been an easy one to him particularly in the area of empowerment.

“Before 2015 I have always tried to empower the youth and get you involved in appointments, but this time around as a result of what I call human factor, things have not been the same, I believe it is the will of God. When you all are complaining and you give example of Gegele and co and you compare it to what is happening now, I am sure you are asking yourself, what is happening? how come all of you struggling with me are not rewarded, it is unacceptable.

Audio Convo: Epic Revelation As Bukola Saraki Reveals Why He Oppose Buhari As He Addresses His Followers In Kwara

“What is the point of putting everything into the emergence of a government and we could not benefit anything from the government, you are asking yourself, what have you benefited. If you have not benefited personally in the last 3 and a half years, how do you go to market us, wont people ask you what you have benefited for yourself?

“It got to a stage that people will be making fund of you and asking you what you have benefited, but what is happening from Abuja, use me as an example, in 2015 I carried APC on my head around Nigeria. Hardly any state in Nigeria that I did not campaign for President Buhari, up to the time of the election in 2015, out of 36 states I paid for the election of 30 states.

“Out of 36 states in Nigeria I funded Buhari’s campaign in 30 States; some states I paid 200 Million Naira, some 300 Million, some 400 Million, the only states I did not fund are South West States. Many times I will be calling my Banks to send money to fund elections across Nigeria for Buhari. My thinking was that when we get elected, the next thing is that we will get majority of our people appointments.

“In fact I had already promised some of you here that you will either be MD of Federal agencies, either road maintenance, NIPDA (inaudible) even Nigerian Ports Authority, SUBEB and so on and so forth. I know if I put someone amongst you from Kwara even in the smallest Federal agencies, the contract you will sign out, 1 Million, 2 Million, but for the first time that I have been in politics even speaker cant appoint a cleaner.

“I as President of the Senate, I could not even appoint a cleaner not to talk of Board appointment, if you look at Executive positions I have nothing even after spending Billions for 3 and a half years, I am as angry as you are. I am fighting President Buhari because of you, if it because of me I wont fight, it is not easy to fight the federal government, the sufferings you are all going trough is because they did not fulfil our agenda.

“In 2018 I told you all I wont be going with APC but in the last one or 2 months that I left I have been doing a lot for you people, my politics is for all of you, I am just here to empower you all, don’t mind the one who just bought form for 33 million. It was not my plan not to appoint you, when when David Mark was Senate President, every confirmation he made for the President came with something, if they really love us now you will be empowered.

“In the past we they have a cut for Senate President and Speaker but not anymore, so we are no longer going with APC as soon as we joined PDP they called me National Leader when I lost election Alhaji Atiku came to me immediately. Now we have seen the sign that if Atiku becomes President, things will come to us, he told me I am the only one that can run his campaign, I know it is not easy for you all, but let me assure you things will be better.

If you understand Yoruba, Kindly listen to Saraki here.

Shocking revelations from the #GrowNigeria crooner.

Why I decided to oppose @MBuhari – @bukolasaraki addresses followers in Kwara State 👇https://t.co/XmmzyK1Cot

“God see my “aniyan” (Arabic word) now in PDP they have brought us closer, how many people in Kwara did APC bring together in Kwara, now we will soon have power, today in APC they want us to go to Asiwaju Bola Tinubu in Lagos. If I am the only one in PDP I will fight alone, my Father made Kwara and took Kwara to the top 10 in Nigeria and I also took Kwara to between number 1 to 3 in Nigerian politics and they now want us to bow to Lagos.

“In the coming election we will put Youth into power in Kwara, let us take Hon. Atunwa as he his, he will take care of you all, all those who contested against him are loyal but Atunwa will….. inaudible. When I was Governor I gave a lot of young people contract, they buy land etc and then empower others, I want to return you to the days of when I was Governor when you were all enjoying, Atiku will open things when we win election.

“You know as a leader I see things that followers don’t see, when we followed Buhari, we felt after spending money, we saw that he failed to reward us, so we said this Baba is not coming back, no money, no patronage all over Nigeria. Even with all the problem we have with Buhari the little cut I get I always send to Kwara but I can tell you that we had to design a method to make the little we have, they did not involve us in sharing.

“The only agenda APC have for Kwara is to fight Bukola Saraki, they favour Osun State with empowerment, for the remaining time of Buhari we will still get some things, we gave them list for FIRS for three years they did not employ our list.

“Thank you for listening to me.”