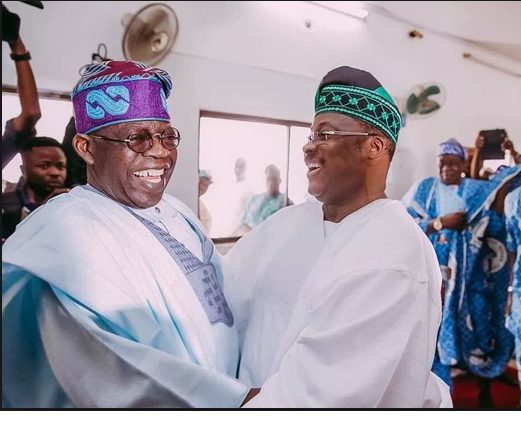 The outgoing governor of Oyo State, Senator Abiola Ajimobi has been ban from attending any APC‘s campaign rallies or events ahead of Saturday’s governorship election in the state. According to a report by Sahara Reporters, the national leader of the party Asiwaju Bola Ahmed Tinubu, bans Ajimobi from appearing at APC‘s campaign rallies, tagging him as bad personality to be associated with.

Ajimobi lost his Oyo South Senatorial District bid to Dr. Kola Balogun of the Peoples Democratic Party (PDP), who polled 105,720 votes to Ajimobi’s 92,579 votes, meanwhile the other two senatorial slots were won by the APC. To worsen matters, of the five federal constituencies in Ajimobi’s Oyo South, APC won only one, while PDP has already won three and is set to claim the fourth when the election is concluded this weekend.

APC’s woeful outing in Ajimobi’s expected stronghold has prompted protests from party leaders, with Bola Tinubu, the National leader, now personally overseeing the campaigns in a desperate bid to prevent a potential surrendering of the governorship to the PDP. And one of what Tinubu has quickly done, apart from buying off Adebayo Alao-Akala’s candidature, is to ban Ajimobi from showing up at APC governorship campaign meetings involving Bayo Adelabu, the party’s candidate.

“The belief of Tinubu and other APC leaders is that it is Ajimobi that the people are angry with — not APC — therefore he should stay away from campaign activities,” an APC source very familiar with the development told SaharaReporters.

“The fear is that Ajimobi’s appearance at Adelabu’s campaign rallies will be damaging for the party. In fact, there is a jingle of the party begging the people, explaining that Ajimobi, not the party, is the fall guy. Since the presidential and national assembly elections, Adelabu has been campaigning on his own — without the Governor’s involvement.”

In the said jingle, listened to by SaharaReporters, APC “begged” all indigenes of the state in the name of God and in the names of prominent Yoruba sons such as Vice President Yemi Osinbajo, former Governor Bisi Akande and Tinubu. The party also mentioned President Muhammadu Buhari and Adams Oshiomhole as begging the people, and specifically censured Ajimobi for his pride in disrespecting the Olubadan of Ibadan, among many other offences.

Not a big fan of Ajimobi, but the way they are throwing him under the bus now is ridiculous. There’s a new APC campaign jingle that actually denigrates him. https://t.co/fCZL5u1cq9

They unlooked. I remember boys here who know nothing about Ibadan and its kingship supporting Ajimobi when he was ridiculing Olubadan. Now Ajimobi is the fall guy because he is weak. If he won two weeks ago, they would be shouting “Koseleri”. https://t.co/dTOs75iUbr

New APC jingle in Oyo state- Insults Ajimobi, begs Oyo people to vote for Adelabu because “Ajimobi is the problem, not the party”

That APC jingle is mad. The lack of respect for Ajimobi makes no single sense sha. But i am not surprised, as it is a party of anything goes

LOOOOOOOOOOOOL APC is basically begging the people of Oyo not to look at the nonsense Ajimobi did. I FUCKING LOVE THIS GAME