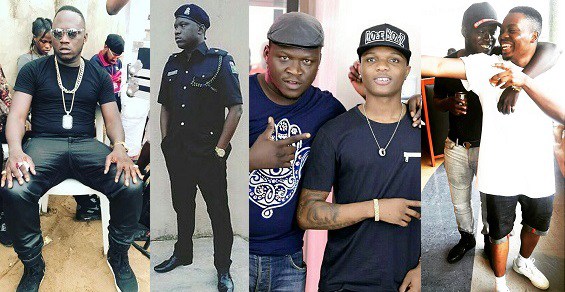 While thousands of Nigerian are currently expressing their dissatisfaction toward the unprofessional activities of Special Anti-Robbery Squad (SARS), a unit of police, with the #EndSARS hashtag that as being trending on social media for days now. But there is one of Nigerian SARS officer that ” doubles “ life as a cop and musician.

This Nigeria SARS officer-cum musician goes by the name Yomi  Sars, popularly known as Gucci Mane Eko is a 30-year-old policeman who is also a musician. Most of his songs see him talking about life on the streets and how he has gotten to where he is today.

In one of his post on Instagram, Yomi SARs speaks on what attracted him to the streets, ” I was born with a silver spoon but I left the comfort of my home to be on the Street just as if I knew my mum won’t stay on for long……I thank God who led my path on the street and make me a better person.”

Report had it that he has close relationship with Nigerian celebrities, most especially Olamide where he as seen to have attended Baddo show several times and seen giving shout-out to each-out on social media.

His other friendship circle include A-list artists such as Pasuma Wonder, Reminisce, Wizkid, Phyno, Davido and more.

According to him, he said that he make music from the street for the street. Some of his discography indicate that he draws his inspiration from Lagos mainland, for his delivery style is core street, where he freestyles in Yoruba, over heavy beats.

Since past few months, he had released singles include ‘Japa’ (produced by Young John), ‘Adoyoyo’, and ‘Gucci Mane Eko’.

Off the mic, Yomi is actively involved with combating crime. He is regularly involved in special missions. One of his mentors is Abba Kyari, an assistant police commissioner of Lagos State has been labelled ‘Nigeria’s Jack Bauer‘ due to his effort in bringing high-profile hoodlums and criminals to justice. He’s the guy who led the operation to apprehend Evans. Yomi works with Abba Kyari, and sometimes share insights into the workings of the police.

“Yomi is a great guy,” says a police officer, who refused to be named for this post. “He is a friend of everyone, and we can all rely on him. That’s why he is popular to everyone, and he has a good heart.”

Once during an operation to catch kidnappers in Delta state, a cop was killed during the ensuing shoot-out. Yomi took to Instagram to reflect upon it. “We lost a brave officer yesterday was shot by a deadly kidnapper in delta state…& was buried today….Inspr Rasheed Sanusi may ur soul rest in peace….If I die today I die a hero cos my 21 gun salute must complete,” he said.

As the growing voices of Nigeria’s youth against the brutality of SARS operatives continue to rise, Yomi addressed the issue on Instagram. You can find the post below.

“The #EndSARS is no longer one that any responsible Citizen minded Police officer can ignore, not necessarily giving credence to some of the gory yet vivid narrations but Policing is to maintain the public peace in whatever guise the unrest may come.

From Wuang, Dallas, Frankfurt, Paris, London and even Conakry Citizens have at some point in time, say recently protested against Police brutality. It comes with the job, it is a sad truth. It’s same as the Doctor that leaves a spatula inside a patient or watches a patient die because the family couldn’t make cash deposit for treatment, it’s like the school Proprietors that wouldn’t allow the most brilliant child in the school write exams because the parents can’t afford to pay the fees, the Lawyer that breathes well knowing an innocent person have gone to jail only because legal fees couldn’t be paid . All these hinge on the individual’s world view, personal background and moral check list.

Definitely some Officers are on the extreme in the line of duty, some are on the job for personal gratification but we must commend the larger percentage who are worthy Ambassadors of the Police Force. Those that daily defy the lack of basic needs like accommodation, uniform and other kits, up to date technology and equipments, no life insurance or worthy compensation for family and or loved ones in the case of death in the line of duty and with the little they’re given, combat violent crimes, conduct investigations, track down cunning criminals and do all they can to maintain law and order. I say again, a greater number of Officers of the Nigeria Police Force are Heroes without capes.

My simple suggestion in lending my voice to the #EndSARS is this; let us together raise the standard of our society, our collective existence as a people, for if we’re yet to realize every singular facet of the society reflects the whole, as no entity can forever stand aloof. Justice is a system, a societal measure and as the Yorubas will say “Gba fun Muri ni gba fun Gbaja”. This of course shouldn’t stop the Police from looking into the various allegations levelled against the body, and the need to investigate and weed out the wolves amongst us.”