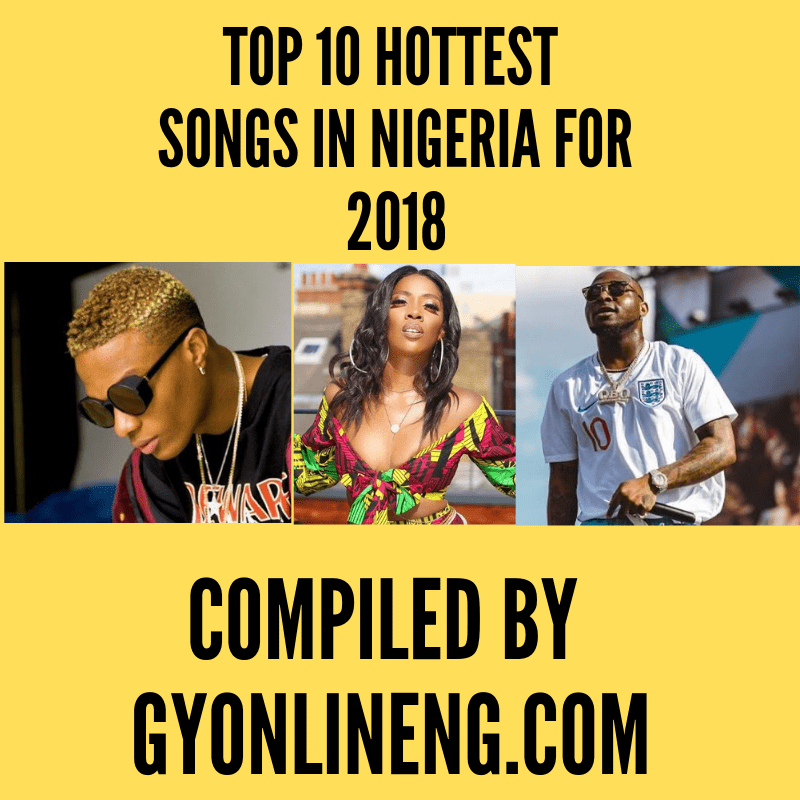 The Year 2018 has been an interesting outing among Nigerian musicians & we listeners because during the calendar year our various musicians have entertained us with their various well-crafted songs. And it’s our job to share with you Top 10 Hottest Songs In Nigeria for 2018.

In 2018 alone, there are over hundreds of song released among Nigerian musicians, but few songs top the country radio & TV charts alongside with club vibe domination and street credibility. In fact, these songs are on the lips of Nigerians during the year and they are your party favourites.

Over the past few months, club & street anthems, drill bangers or more introspective, thought-provoking songs were released by our musicians, but these selected songs made our year.

The criteria for this year best hottest song in Nigeria are based on longevity on the chart, shaping culture, street & club acceptance and streaming success on all digital stores.  Here Are Top 10 Hottest Songs In Nigeria for 2018 below:

Top Songs Of the Year In Nigeria for 2018 Compiled by GYOnlineNG.COM

Sometimes in the middle of the year, Victor AD infused more life into the already buzzing Nigeria mainstream music with ” Wetin We Gain ”. On that song, Victor AD, who’s an aspiring singer captures the daily experiences and struggles of average Nigerians and turned it into a major hit.

” Wetin We Gain ” is Hunger for Success. It’s a song that manoeuvers itself into the lips of Nigerians, and also into rotation playlist of various radio & TV stations. The song taps into the cultural sentiment of young Nigerians (Yahoo Yahoo/ Internet Fraud) without passing any judgement.

Arguably hard-working DJ in Nigeria 2018, DJ Spinall enlists the service of Wizkid on Killertunes beat that was laced on good effect of drum bass with cutting-edge sharpness of snare kick around a roving piano to make a befitting Shaku song.

In 2018, Mavin Records first lady Tiwa Savage pushed further away from her comfort zone of releasing female-typed music, by releasing a piece of masculine typed music. In the song, both Tiwa Savage and Duncan Mighty shows their power-house for songwriting in a song that could have been decent, but excel through a star deliver.

The Koko Master himself D’banj are one of the early adopters of the Shaku-Shaku vibe. In that song Banga Lee team-up with sensational street wave kings of the Shaku-Shaku movement — Slimcase & Mr. Real to create a masterpiece of street jam & hit song.

Fake Love by Duncan Mighty is arguably one of the biggest recorded projects of his eternal career. Because the idea of featuring African finest music superstar Wizkid changed the narrative of that son, meaning that Wizkid‘s touch on that song relaunched the career of Duncan Mighty into the mainstream of Nigeria music.

Ye is a single off Burna Boy‘s Outsider album, but an unintentional approach of Kanye West naming his 2018 album boosted Burna streaming success, and the rest is a story today. In another form, Ye can simply be called national anthem of Nigerian music lovers.

Science Student by Olamide is arguably biggest street of the year, in the song Olamide re-crown himself as the street king. In Science Student the Shaku Shaku vibe movement comes alive in the Nigeria mainstream culture, despite highly controversial the song is, according to NBC.

Love Him Or Hate Him! The DMW’s boss Davido is marketing genius & serial hit-maker. Before releasing that song, Davido creates a narrative around his next release by giving out Posh Car to his girlfriend Chioma tagging it Assurance.

In Soco, the Starboy Entertainment boss Wizkid enlists the service of his label soldiers Cezer Milla, Spotless & Terri in Northboi experiment beat that later to create a masterpiece of biggest song of the year. According to the YouTube data Index, Soco is the most streamed music video of the year.