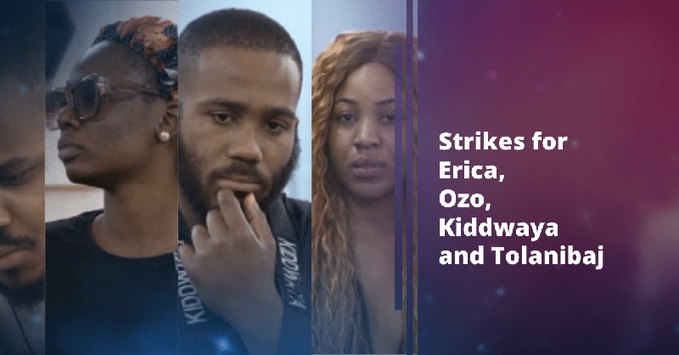 Following a short vacation, Big Brother Naija returns on Sunday afternoon. But during the short absence, Kiddwaya, the head of the house, was in charge of the house as he always received instructions from Biggie through a telephone line.

On returning back from a short break in transmission, Biggie called all the housemates together in the lounge and played a video clip that had Erica and Kiddwaya whispering to each other. While there is also a video of Ozo whispering to Neo, and Tolanibaj received Strikes each from Big Brother.

The selected housemates were given a strike for disobeying the rules and article 19 of the Big Brother house, on the rule book against whispering.

This Is Reason Why Kiddwaya, Erica, Ozo & Tolanibaj Gets Strike From Biggie For Flouting Biggie’s House Rules

“You are guilty of whispering in the house and you have been caught on other occasions speaking in codes and communicate in hush tones.

“Two more strikes and you will be disqualified.

According to the rules, housemates are not to communicate without cameras, in secret code, and tamper with the camera. The very last paragraph of article 19 in the rule book states:

“If a Housemate attempts to communicate without the cameras/microphones recording the communication (e.g. tampering with microphones, writing secret messages, whispering or mouthing words without speaking) or if they try to tamper with or cover recording equipment or if occupants communicate in a secret code – Big Brother reserves the right to issue a strike or disqualify the Housemate.”

For the crime of flouting Biggie’s whispering rules

The rules are not only clear but sacred in the Big Brother Naija House and no Housemate is exempted from following them. Recently, Erica and Ozo have constantly flouted Biggie’s House rules and for this reason, were issued Strikes.

In particular, the issue of whispering has been mentioned quite a few times and the Housemates were told there would be consequences if this was to persist. On that note, they are required to take such a serious rule with levity.

Today, Big Brother found Erica and Ozo guilty of whispering in the House, and on this same table, they have also been caught on other several occasions speaking in codes or trying to communicate in undertones.

For this reason, they have hereby been both issued a Strike. This means two more Strikes and they will be immediately disqualified from the show.

Erica, Kiddwaya, and Tolanibaj have been found guilty for disregarding the rule regarding the Head of House and Deputy Head of House privileges. However, they broke the rules, and allowed their desires and wants to supersede authority.

For Erica, laying in bed in the Head of House Lounge till three o’clock in the morning was not to be considered as visitation, and so she was found guilty for bending Biggie’s rules.

On this note, Big Brother found Tolanibaj, Kiddwaya, and Erica guilty of breaking the House rule on the Head of House Lounge. They are hereby all issued a Strike each. This means that two more Strikes and Tolanibaj and Kiddwaya will be Disqualified from the Lockdown House; one more Strike for Erica will see to the end of her Lockdown journey in the House.

As an additional punishment, for disregarding the title and privilege of Head of House and Deputy, Tolanibaj and Erica have both been barred from next week’s Head of House game. They may not partake, neither can they be selected as Deputy. Moreso, because Kiddwaya is the current Head of House, he was meant to manage the House and bring order but instead partook in the infringements.

For this, his punishment from Biggie was more. He has been barred from the Head of House games for two weeks and may also not be Nominated as a Deputy. Since he is already ineligible to partake in next week’s games, his two weeks begins from the week after next week. So, for three weeks he may not be Head of House or Deputy.