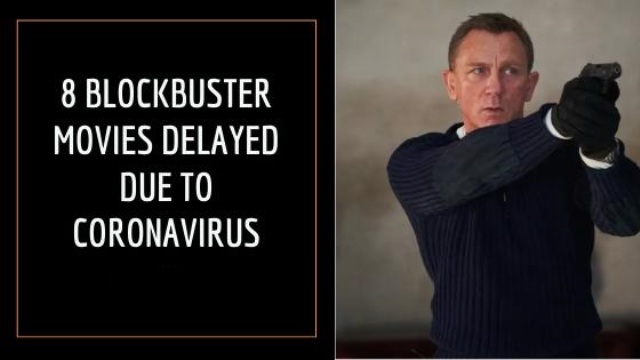 Movies Delayed Due To Coronavirus Pandemic

Major discussions on social media and traditional media platforms these days are all about the Coronavirus pandemic, which has taken the world by storm.

This week alone, Coronavirus has brought the world to a standstill as businesses around the world are closing down, conferences were canceled, sporting events were put on hold, and prematurely ending music tours & festivals.

As the cure for Coronavirus continues to be on research mood by medical experts, let us talk about another industry the virus has caused a major set back. And it’s no longer than the movie industry, as movie studios are delaying the release of their already financed project for safety, financial and health purposes.

However, several countries around the world are placing a ban on each other citizens, while a gathering of large crowds was banned as well, and it has led to new reschedule of already scheduled movie releases so as not to affect box office sales and ultimately prevent more spread.

From the latest Furious franchise ” Fast and Furious 9 ”, to James Bond film ” No Time to Die ” & Disney’s Mulan, here are 5 other blockbusters movies that have been canceled due to coronavirus.

The first-ever outing of Peter Rabbit film was a successful hit, as the movie grossed a whopping $350 million in the box-office worldwide. The movie has star-studded stars such as includes James Corden and Margot Robbie reprising their respective roles from the first installment, while part 2 has been predicted for even greater success.

However, the outbreak of coronavirus has prevented the predicted success, hence, on March 10, Sony announced that it would push its global release date from late March/early April to August.

A Quiet Place Part II is a 2020 American horror film and the sequel to A Quiet Place (2018). The sequel film was written and directed by John Krasinski and stars Emily Blunt, Millicent Simmonds, and Noah Jupe, reprising their roles from the first film. Cillian Murphy and Djimon Hounsou also joined the cast.

However, on March 12, director of the movie John Krasinski, announced on Twitter that the movie already planned March 19 release date would be delayed with the intent of scheduling it later in the year.

Sonic the Hedgehog is a film about Sonic who tries to navigate the complexities of life on Earth with his newfound best friend — a human named Tom Wachowski. However, they must soon join forces to prevent the evil Dr. Robotnik from capturing Sonic and using his powers for world domination.

The film has already grossed over $300 million in box-office worldwide since its February 14, 2020, with the premier in the United States alone. While, the plans for a Chinese premier had already been delayed, as announced on February 24, Paramount Pictures, with a new release date to be determined.

Antlers is a science fiction horror film directed by Scott Cooper from a screenplay by C. Henry Chaisson, Nick Antosca, and Cooper. The movie is about a mysterious creature escapes from its confines to wreak bloody havoc in a small Oregon town.

The movie was scheduled to release on April 17, 2020, but the Coronavirus pandemic has caused the release date to scrapped, with an intent to reschedule it later in 2020.

The New Mutants is an upcoming American horror film in the superhero genre, based on the Marvel Comics team of the same name and distributed by 20th Century Studios. It is intended to be an installment of the X-Men film series. Magik, Wolfsbane and other teenage mutants try to come to grips with their superpowers while staying at a secret facility.

According to several reports, The New Mutants filming has ended in 2017, and it has started gaining momentum of anticipation since the release of the trailer weeks ago, but it’s unfortunate that coronavirus pandemic has affected the released date. Disney has once again postponed the film which was originally set for an April 3 release.

Mulan Disney’s live-action remake of the 1998 classic and it has projected to be one of the best for 2020. The movie is about a a young girl who want to save her ailing father from serving in the Imperial Army, a fearless young woman disguises herself as a man to battle northern invaders in China.

Mulan already had its world premiere at the Dolby Theatre in Los Angeles on March 9, 2020, and was set to be released in the United States on March 27, 2020. However, the film has shifted its release date due to the coronavirus pandemic; Disney is currently looking for a new 2020 release date.

No introduction for this movie, but after three years of waiting Furious 9 is about to be on our TV screen. This movie is about Dominic Toretto and his crew join forces to battle the most skilled assassin and high-performance driver they’ve ever encountered — his forsaken brother.

No Time to Die

Is a spy film in its twenty-fifth installment in the James Bond film series produced by Eon Productions. It features Daniel Craig in his fifth and final outing as the fictional MI6 agent James Bond. ” No Time to Die ”, is a movie about a recruited to rescue a kidnapped scientist, globe-trotting spy James Bond finds himself hot on the trail of a mysterious villain, who’s armed with dangerous new technology.

On February 16, MGM announced that it would cancel the Chinese premiere and publicity tour scheduled for April. On March 4, the movie was officially delayed until late November by the studio.