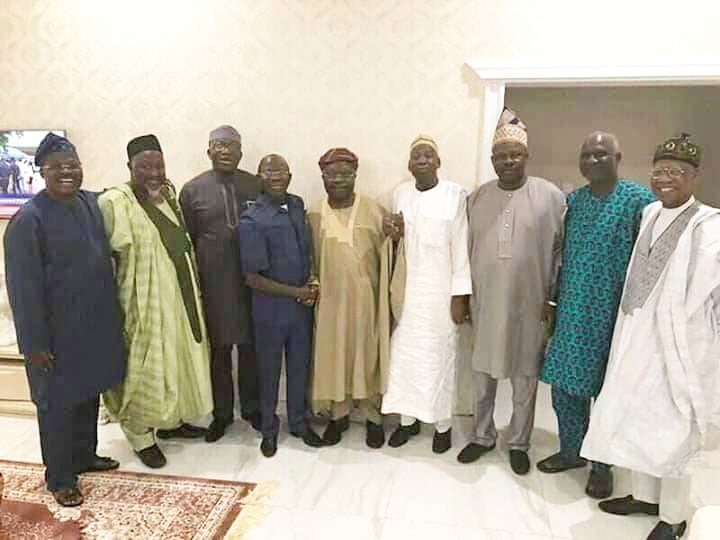 Social Democratic Party (SDP) candidate in the last week governorship election in Osun State, Senator Iyiola Omisore has join forces to work with the ruling party APC in the forthcoming Thursday re-run election between the APC‘s candidate Gboyega Oyetola and Senator Ademola Adeleke of PDP in the state.

In the last few days, delegates from PDP such as Bukola Saraki and Atiku Abubakar has visited Iyiola Omisore who has been described beautiful bride of Osun Politics in order to work with them in the re-run election in the state, but something interesting happened when delegates from APC, led by the newly elected Ekiti-State governor Kayode Fayemi alongside with Minister of Infomation Lai Mohammed, Oyo State governor, Abiola Ajimobi, Minister of Communication, Barrister Adebayo Shittu, Ogun State governor, Ibikunle Amosun, and others worked their magic with Iyiola Omisore to work with them on Thursday.

However, according to report circulation viral online in the last few hours suggested that Sen Iyiola Omisore has agreed to work with APC in the Thursday re-run election in the state, but his agreement to joined to work with APC was based on some three agreements terms.

The report had it that APC has promised a cash sum of N480 Million in Cash, automatic return ticket to Senate, 2 House of Reps Tickets for his deputy & former Minister of Police affairs, two commissioner slots in Oyetola’s cabinet and the immediate drop of all EFCC cases against Omisore with the release/return of his international passport seized by EFCC for almost a year.