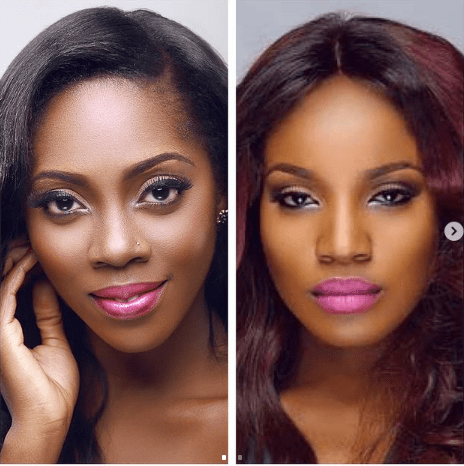 The duo of Nigerian music superstars Tiwa Savage and Seyi Shay was caught on camera exchanging hot words over their long-time beef at a hair salon in Lagos. In the viral video obtained by Tunde Ednut, Seyi Shay was seen to hi to Tiwa Savage, and she responded by saying, she doesn’t want her greeting.

The beginning of Tiwa Savage and Seyi Shay’s fight can be traced back to the verse that Victoria Kimani  & Seyi Shay dropped on Kizz Daniel’s Fvck You Challenge.

Seyi Shay walked up to Tiwa Savage to say hi and Tiwa wasn’t having it after all the insults she has received from Seyi Shay and Victoria Kimani over the years. Tiwa Savage further says to her “Don’t say hi to me ever. Let sleeping Dogs lie. Shey you blocked me on Instagram, block me in real life too. We are not friends”.

This is the Seyi Shay & Victoria Kimani’s freestyle Tiwa was talking about. pic.twitter.com/up0LkT9QUT

You say you be my sister, but you wan collect my lover

You be deceiver, olofofo heart robber

Na why I no dey fuck you anymore

I no get time for you anymore

You know I’m not Savage, I dey pay my bills

You no go see my name for the Xscape

But [Prostitute] come be your hobby

Na so you come take first rate their hobby…

Here’s Victoria Kimani‘s verse on Kiss Daniel‘s Fuck You Challenge that was rumored to have been talking to Tiwa Savage.

However, in an interview with Ebuka for BlackBoxInterview, she directly responded to Kimani for the first time.

Ebuka: What about it hurt you?

Savage: I’ve met her maybe twice or three times in my entire career and I’ve always just been like “Heeey, how are you?” so that came out of nowhere. Like, I was…you know when someone knocks you out.

Like I was not even prepared to defend myself. And I always used to tell China who is like a sister to me, she does my hair, I always used to go on her (Victoria Kimani’s) page and be like “Yo, look how she mixed this socks with this skirt”. Like I always used to admire her fashion, like even just the way she does her makeup like she had this kinda Asian I don’t know what it was – it was just cool.

I just felt stupid. This is someone like everywhere I go I would say like oh, fashion wise, I love how she dresses and I love her vocals. I used to sing “Kimani killing show immediately”. Like, I’ve done snaps of that. So I was just like what happened? Till today, I don’t understand. I don’t get it. I don’t know where that came from. It was bad. She literally called my name in the song and I just got my car and she was insinuating that it was some old man that I was seeing. Ha! You’re in the industry.

I mean, I don’t even think as big as Wiz or Burna or David is they can tell a promoter you cannot put this other person in the show…how? How do I have that power? I’m trying to be on the show. I’ve never even had that conversation with anyone. Man, it was painful for someone I really really liked. That I genuinely supported.

Ebuka: Where do you think that came from?

Savage: I still don’t know because I went off. Initially I thought it was from Kpolo cuz that’s what they mentioned and they were like promoters promoters but it was only one promoter they were mentioning. Say who these people are, I would personally call them out. Like, who are these people? It can’t be anyone from my team and if it is, that person is getting fired immediately. I spoke to Kpolo and he was just as shocked.

He said no, he never said that. So I still, I really don’t know. Which promoter said that I said that? Or I’ll tell radio stations that they can’t play any other female songs? How? (laughs). A radio station? How? Even if I was Tiwa Adeleke and I had that kind of money I don’t think I have enough money to pay a radio station not to play other people’s records.

So why can’t I stop Teni, or Tems, or Simi or Yemi Alade? Like do you get what I’m saying? I don’t know where that came from. That really hurt. I was in my room just confused for days.