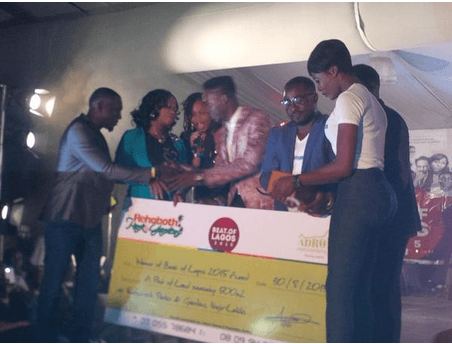 YBNL recording act and rave of the moment Afro-pop singer Adekunle Gold, beat heavyweight giants such as his label mate boss Olamide, alongside with Patoranking, Korede Bello, Koker and others to emerge winner of this years ” Beat Of Lagos ” awards 2015.

The ” Shade ” and ‘‘ Orente ” crooner Adekunle Gold, smile home with a plot of land at the Lekki free trade zone courtesy of Adron Homes.

The ‘‘ Beat of Lagos ” awards was headlines with the Chocolate City All-Stars such as MI, Ice Prince, Jesse Jagz, Victoria Kimani, Nosa, Koker, Ruby Gyan, DJ Caise, DJ Lambo and many others.

The award ceremony  ” Beat of Lagos Award ” was introduced last year and was won by ” Dorrobucci ” by the Don jazzy led Mavin crew winning the awards.