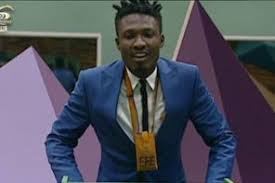 The newest slang in town right now is Based on Logistics, if you have been hearing it from your friends, colleagues and even on social media — if you are still wandering what bring that slang to go viral, your wait is over.

According to dictionary ” Logistics ” means  the planning, implementation, and coordination of the details of a business or other operation.

Late yesterday night, Big Brother Naija housemate defies all odds as he became the winner of the reality show. Lets goes back to memory lane, Efe created the catch phrase while he was in the house and turning it into his play word.

After he was announced winner of the reality show, ” Based On Logistics ” started trending on Twitter and Nigerians have used it to match whatever it the is they’re trying to say.

“Based on Logistics” tees will hit the market tomorrow. you heard it from me first. lol

@Ebuka so based on logistics he had over 14,978,600 votes…… More than the entire votes casted last week

For the next couple days I’m going to be starting my conversation with anybody with BASED ON LOGISTICS pic.twitter.com/qXUZF4FYUa

Just waiting for the release of Efe’s smash hit single – Based on Logistics ft Olamide.

No doubt based on logistics, I don dey celebrate with Efe already if big brother like, make dem do all the adverts for this world. #BBFinale

No doubt based on logistics, I don dey celebrate with Efe already if big brother like, make dem do all the adverts for this world. #BBFinale

#BBFinale
If Efe jus win….
Our next President might come from Warri.!
🐸
Strictly Based oN Logistics

Continue Reading
Advertisement
You may also like...
Related Topics:#BasedOnLogistics, Based On Logistics, Big Brother Naija, Efe

#BBNaija : How Most Loved and Favoured Housemate Efe Defies All Odds to Win Big Brother Naija 2017, Is Margin Winning Point Will Make You Cry
All You Need to Know: UK/US Electronics Ban on Flights and How It Affects Nigerians
Advertisement