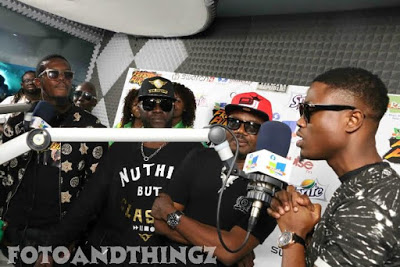 On Friday August 21st 2015, rapper Vector the Viper, makes a history by becoming first African rap artists that will freestyle for 2 hours and 30 minutes non-stop on radio.

The Chocolate City president and rapper MI Abaga, took to social media to expresses his own view on Vector‘s 2 hours and 30 minutes non-stop freestyle on radio, he says that Vector be the best freestyler we have.. I’m not bad either tho.. But I think I’m better writer than freestyler.

Without creating beef between duo of Nigeria greatest rap artists MI Abaga and Vector the Viper, in my own view I supported MI‘s opinion that Vector is best in freestyler, but MI is better than him when it comes to writing.

Vector might be the best freestyler we have.. I’m not bad either tho.. But I think I’m better writer than freestyler https://t.co/1s9n9ZQo1x

Both rap artists are still one of those people are trying hard to make Hip-Hop genres of music to stay alive in Nigeria.

Did You Agree with MI’s View as Good Writer Than Freestyler.

Most Nigeria Music Lyrics Will Make You Cry and Upcoming Artists are Not Entitled to be Support with Airplay — Beat FM OAP Dami
Photo of the Day: Shovel used to serve food at IDP camp in Maiduguri
Advertisement