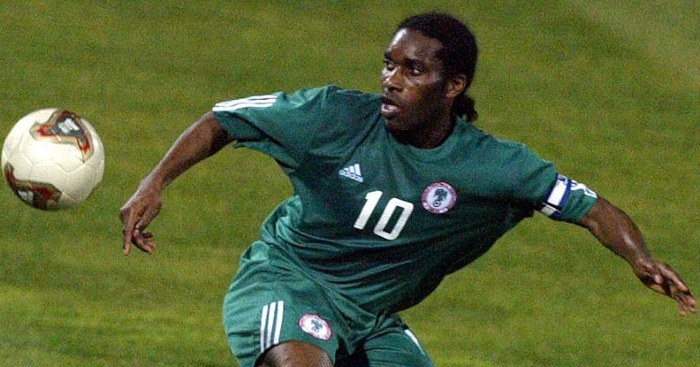 The retired attacking midfielder, Jay Jay Okocha, who is regarded as one of the best African footballers of all-time having had an 18-year career as a professional player, reportedly said that not winning the CAF African Footballer of the Year award is his biggest regret in life.

“And if I’m to say, I’ll say, I regret not winning the African Footballer of the year,” Okocha said on Mastercard.

“But of course, if you look back, there’s always a time that you say ‘Oh maybe you could’ve done a bit better than you did’.

The highly skilful talented playmaker won the Africa Cup of Nations (AFCON) in 1994 and the member of the Olympic Games gold medalist in 1996 with Nigeria during his playing days but admitted that he did not do enough to win the prestigious accolade of CAF African Footballer of the Year award.

Super Eagles Legend Austin ‘Jay-Jay’ Okocha Reveals Biggest Regret In Life, But What Is That?

Okocha was runner-up in 1998 behind Morocco’s Mustapha Hadji and also finished third in 2003 and 2004 respectively.

“I thought I did enough to have won it because it was not a fluke that I won the BBC player of the Year three years in a row and not managed to win that CAF award,” he continued.

“But I mean maybe it was not meant to be. Well, I think I don’t want to sound greedy, but I’ve had an amazing career, I never thought I would make it that big.”

Former Big Brother Naija Housemates, Tacha Signed One of the Biggest Deal In 2020 With Oppo Mobile Nigeria
Kim Kardashian West Breaks The Silence On How Her Husband Kanye West Is Struggling With Bipolar Disorder’s Mental Health Illness, Request For “Compassion And Empathy” From Media
Advertisement