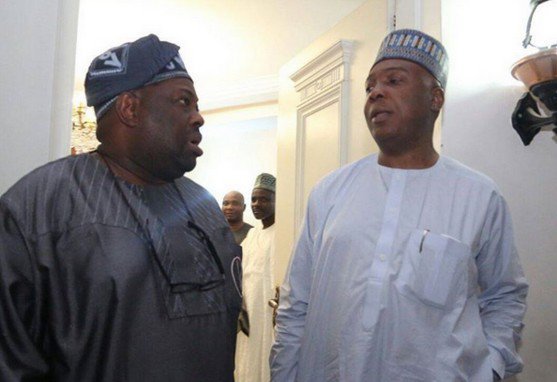 Fellow Nigerians, these are interesting times in our dear beloved country. High-wired politics is here again and there are many gladiators already queueing up for the biggest prize of all, the Presidency. The latest political figure to throw his hat into the ring is the President of the Nigerian Senate, Dr. Abubakar Bukola Saraki, who declared his interest in dramatic fashion, two days ago, whilst addressing a gathering of some selected Nigerian youths.
As always, I have continued to follow developments on this latest declaration on social media. While many were jolted by Saraki’s decision, I was not surprised at all. I had written about his decision a few months ago. At that time, I was scorned at, as usual, by those who have no access to news or newsmakers but come online just to attack and disparage everyone. Anyone who understands the game of politics would have realised that the main reason Saraki has been under ceaseless attack and near annihilation is because of his long suspected Presidential ambition. I will explain further, very shortly. But before I do, let me say something for free. I know, many are likely to dismiss Saraki as a smaller fry to President Muhammadu Buhari.  Let me plead with anyone who cares to listen that I don’t see Saraki as someone joking, or testing waters, as some people are suggesting. I have studied the man like a book and have come to discover some of the things that make him tick. Saraki’s biggest strength and threat to his adversaries is his calm mien. He is a man of few words. He is deep and calculating. He loves to be underrated. Then he strikes.
I was one of those who used to dismiss his rumoured Presidential ambition as totally impossible. Several times, I had omitted his name when writing about possible Presidential aspirants and he would ask why I thought he was not qualified to govern Nigeria. And my stock answer was usually that the geographical location of Kwara and his own cultural roots naturally and automatically disqualified him. I used to ask, almost rhetorically, where would he pick his running mate from since many Northerners may want to see him as a Yorubaman and thus a Southerner. He finally made his pitch on this vexed issue to me at great length and with strong conviction, when we met, last week in Ilorin. Let me now take you through the mind-set of this enigmatic politician who may yet spring another surprise on you and I, and cause an unexpected revolution in the political landscape and socio-cultural configuration of Nigeria.
I was privileged to sit with Dr Saraki as his guest during the Eid El Kabir festival, in Ilorin. My mission was to penetrate his mind and unravel his mythical essence. I have already met a few other formidable Presidential aspirants such as former Vice President, Alhaji Atiku Abubakar, former Kano State Governor, Senator Rabiu Kwankwaso, and former Cross River State Governor Mr Donald Duke. I have had brief telephone conversations with the Governor of Sokoto State, Waziri Aminu Tambuwal, the Publisher of Sahara Reporters, Comrade Omoyele Sowore, international motivational speaker Mr Fela Durotoye, BEN Television UK Chairman Mr Alistair Soyode, Finance expert, Mr Tope Fasua but have not had the opportunity of sitting down with them. My encounter with Saraki was extraordinary. He opened up like never before. I have known him a bit since our collaborative work on the Buhari project, but I have never seen him in this form or mood. He was turbocharged and seemed to speak from the heart.

Pendulum: How Saraki Plans To Defeat Buhari in 2019 by Dele Momodu

He said the war against corruption would improve and succeed only when it is not subject to the whims of one man sitting on the throne in judgment against sinners and we must strengthen the relevant institutions and put in place genuine checks and balances that knows no sacred cows and treats all Nigerians equally in matters of crime and punishment. “The present style of grabbing and prosecuting Nigerians and convicting them on the pages of newspapers and social media is, to say least, cruel and unfortunate, in modern times.”

Saraki said he has a major blueprint for moving Nigeria forward in the 21st century and this would be offered to Nigerians for proper scrutiny. “They are concrete and cardinal steps towards our redemption not the empty rhetorics of APC that has yielded little in almost four years,” he said, with a tinge of regret and lamentation. He has promised to work with like minds at home and abroad. He is grateful to the members of PDP for the way him and his group were welcomed back so warmly. He said he would never take it for granted that the golden ticket of PDP would be easy to get, but he believes that if it is God’s wish, then he will get the it with gratitude. However, he also said that he is willing to cooperate fully with whosoever is chosen, if that is not his destiny. “Nigerians cannot afford another four years of this sluggish, directionless and vindictive government. It is our duty to work hard by the grace of God and rescue our great nation…” Saraki said with great faith and palpable confidence.

Now, to the clincher and grand finale. Why is APC seeking his impeachment by fire by force? Saraki was ready with a response: “APC knows the Constitution of Nigeria even if they pretend otherwise. They know there is no way they can remove me legally. That is why they were driven to the limit of desperation and feverishness by the invasion of the National Assembly, which is the only reason they are a bit sober right now, out of shame that the brazen invasion by DSS at their behest and instruction failed. The threat by their Chairman to remove me was nothing but empty noise. That aside, the main reason they want me out is they are not willing to take the risk whereby the number three citizen will tackle the number one in a Presidential election. When that happens, they know I will have substantial access to State apparatus like the President. They would rather face candidates who are like orphans and not mandatorily protected, or provided for by State power. But as President of the Senate, that is guaranteed…”

At the end of the interaction, I reviewed Saraki’s probabilities and came to the conclusion that although his chances may appear slim, for now, a PDP ticket may all be what he needs to break sound barriers, and underrating this cat with nine lives may well be the biggest mistake that his opponents can make.

Ex-Convict James Ibori Set to Dump PDP for APC ” PDP Sent Me to Jail, APC Released Me ”
It’s News, But Not So News! Here Are Top Stories We’re Unable to Cover During The Week
Advertisement