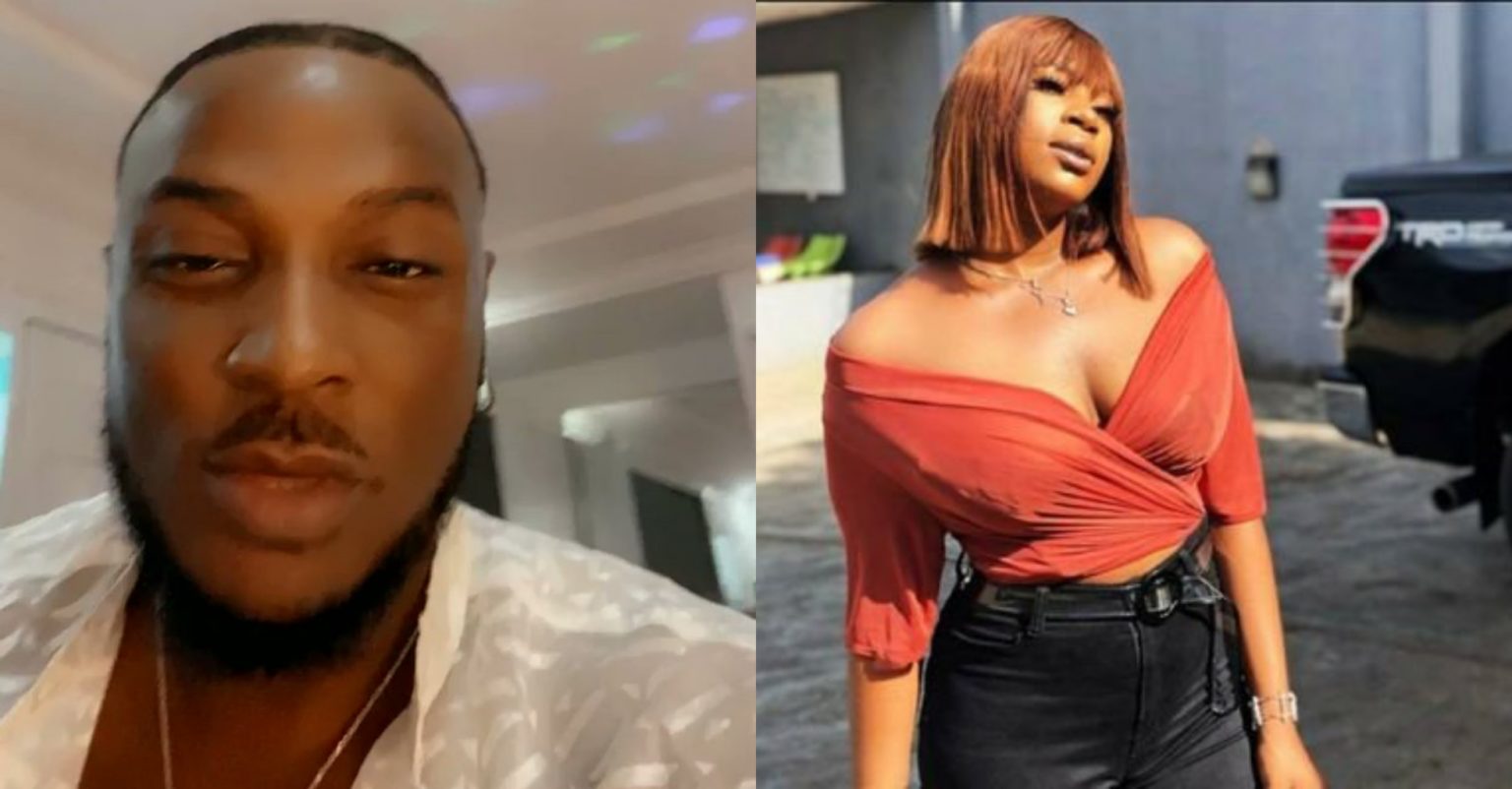 Peruzzi In Rape Allegation Scandal: Lady Accuses Peruzzi of Raping Her In 2012

Nigerian singer, songwriter and associate of Davido‘s DMW label, Peruzzi is the latest Nigerian entertainers who have been accused of a rape allegation, as a young lady identified as Princess took to micro-blogging social media platform to call out the ” Majesty ” singer of sexually assaulting her in 2012.

According to Princess, she said that she followed her friend Aisha to visit the Peruzzi at his home then because they were dating that time.

Princess narrates how the event unfolds that time, she says she happened to stay in the same room with the Peruzzi and her friend because the other rooms in the house were occupied. The young lady said that later in the night, she then further says that Peruzzi started to fondle her breasts with her friend sleeping in the same room.

The young lady said that the singer did not disturb her again till she had slept off and felt someone unbuckling her belt. She said that Peruzzi became forceful and held her neck and tore her pant and raped her.

Peruzzi In Rape Allegation Scandal: Lady Accuses Peruzzi of Raping Her In 2012, Witness Denies the Incident But Old Peruzzi Acknowledgment Tweets Is Hurting Him

Princess said that she was even too naïve at the time to think of going to the hospital for a test right after and that she could not report the case because her parents were unaware that she was in Lagos.

Here are her Tweets below: 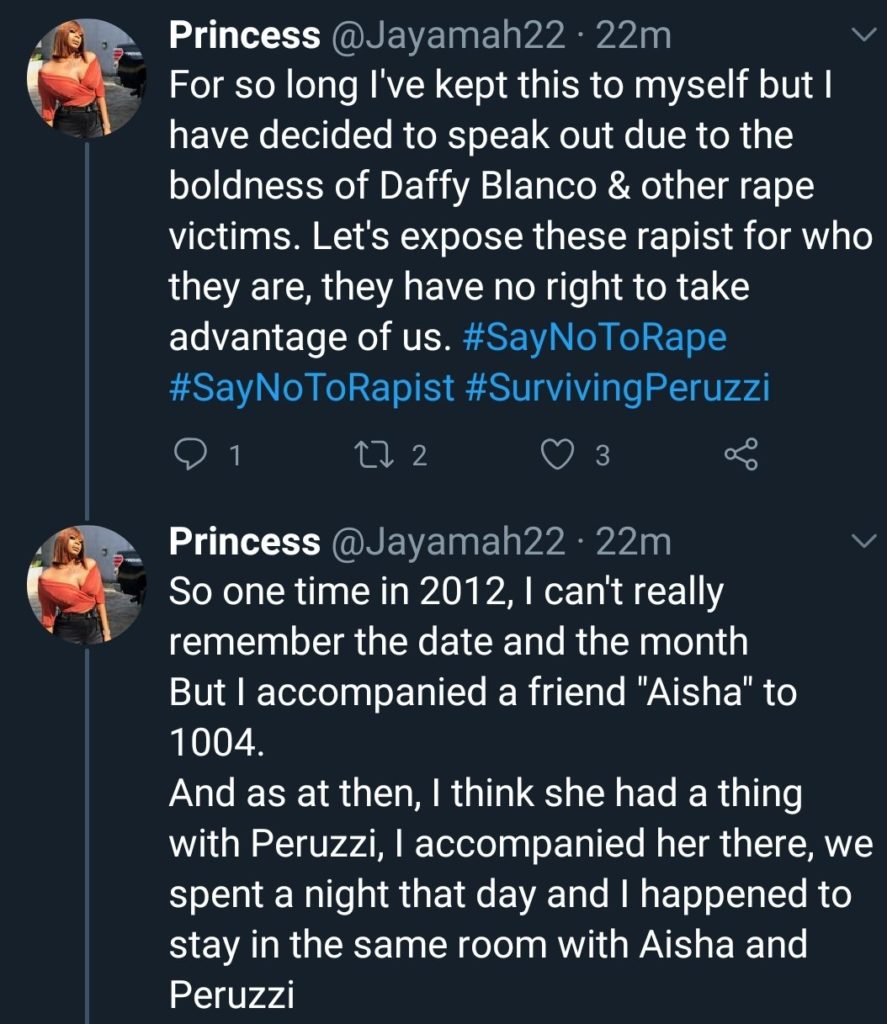 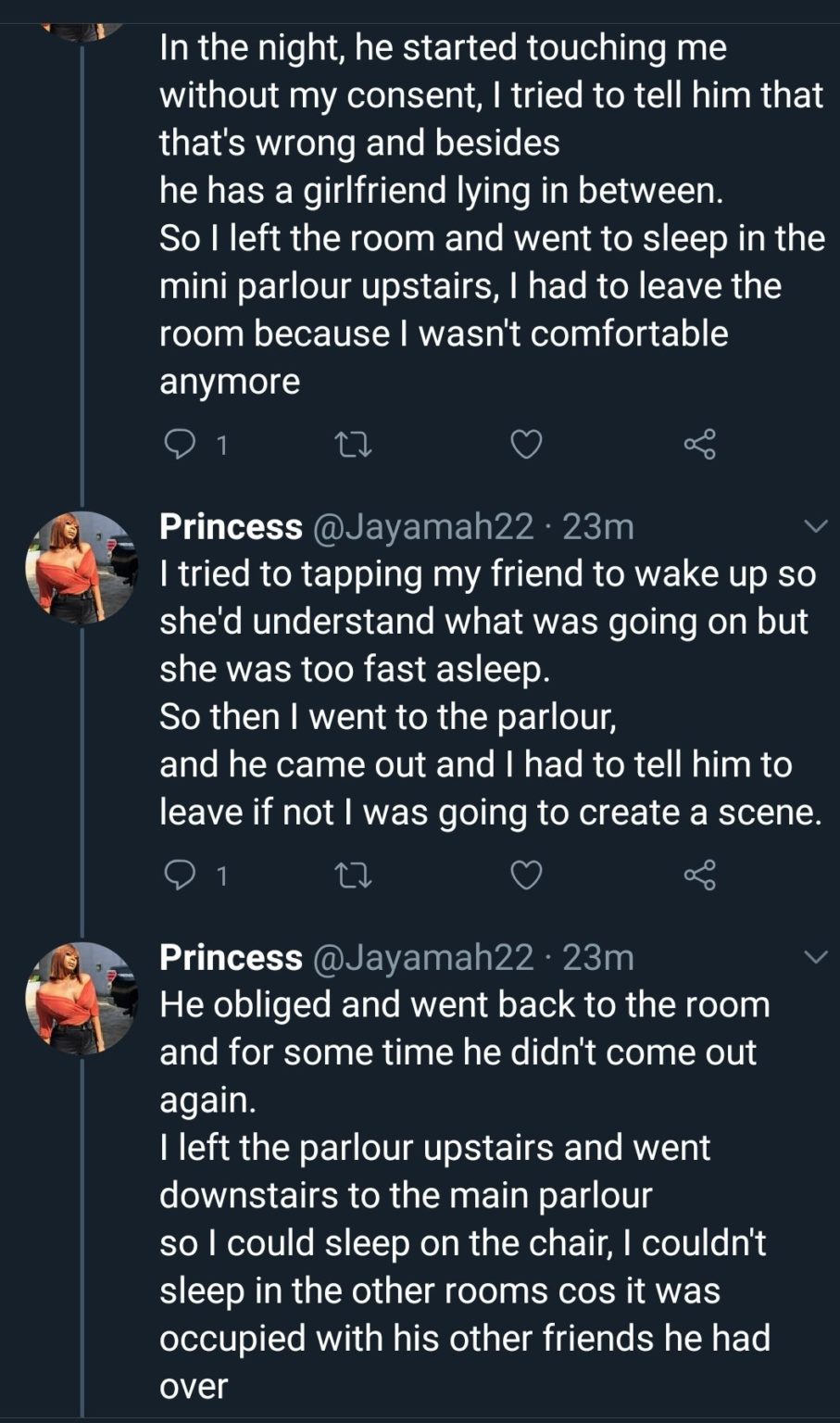 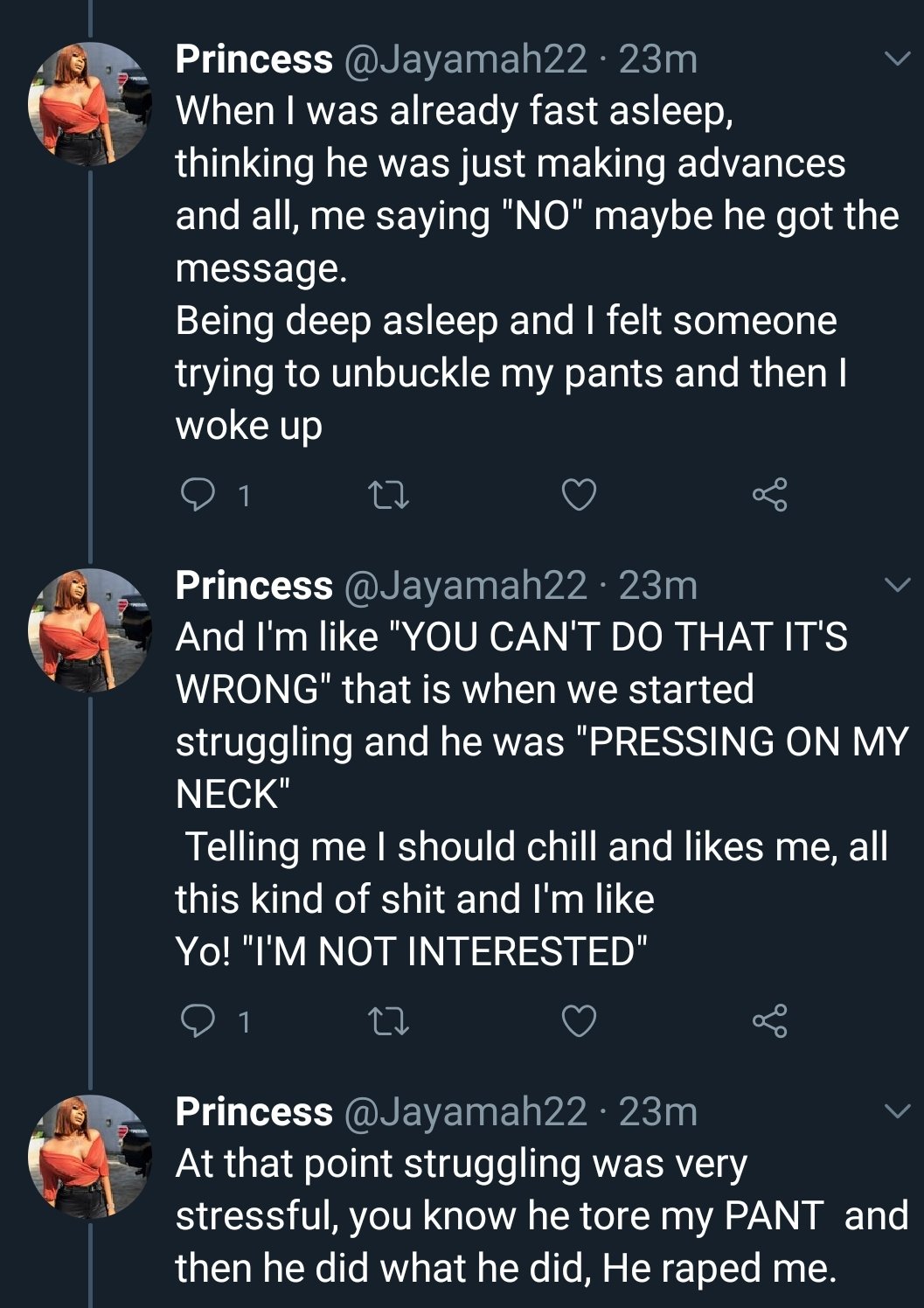 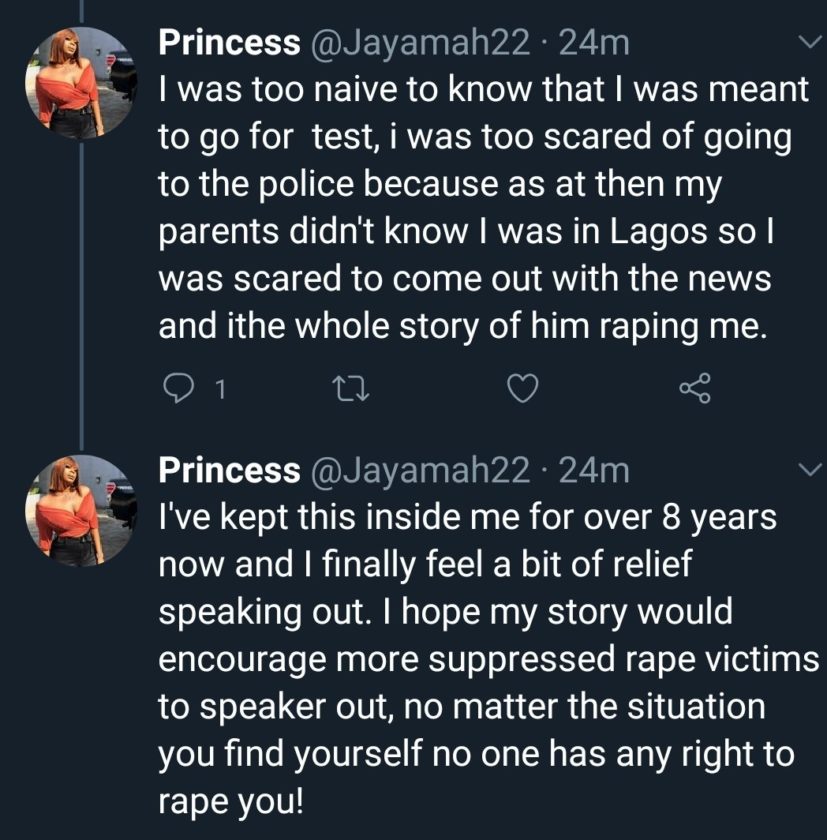 As the situation continues to unfolds, old tweets of Peruzzi is here hurting him. In the deleted old tweet, Peruzzi was acknowledging that he’s a rapist. 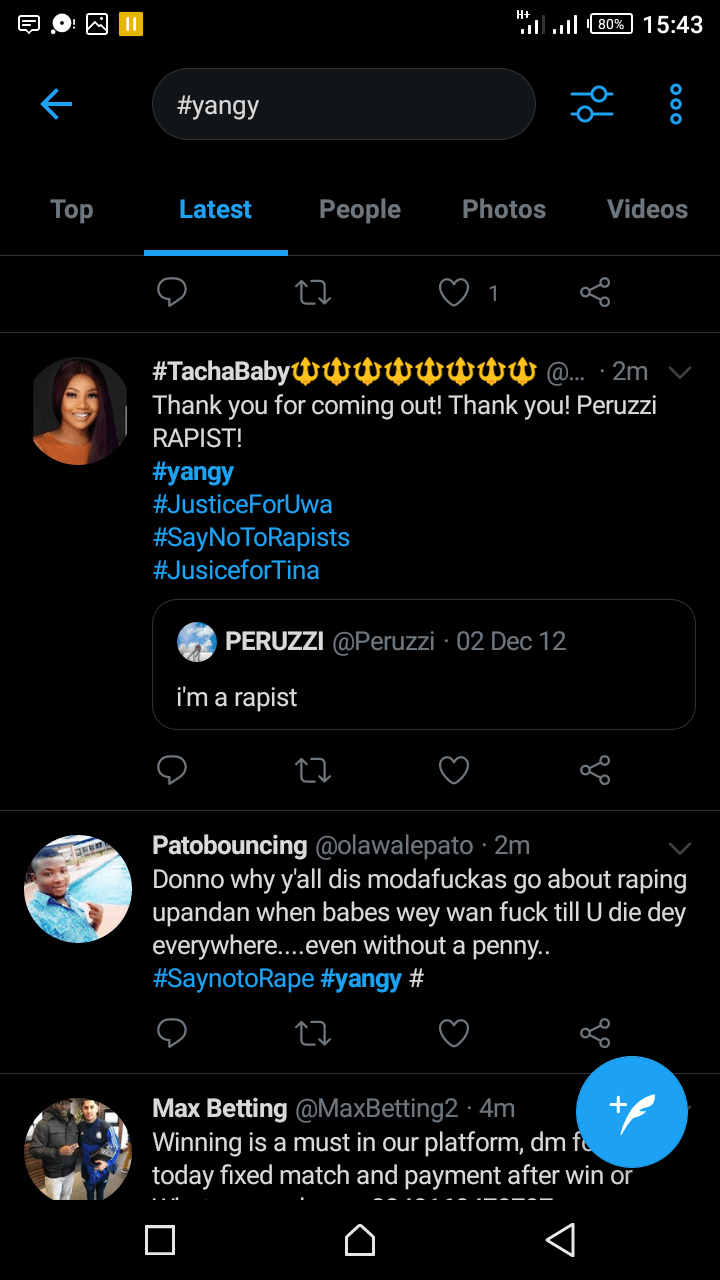 A witness identified as Aisha, who was reported to have present in the room where Peruzzi was alleged to have committed rape, has said he never did it.

However, in order to clear his name, Peruzzi went on Instagram Live with Aisha. Aisha and Peruzzi admitted that they had a thing in the past but Aisha has now moved on.

Aisha also said that she knows Peruzzi and he will never do such. She added that she was there and her friend was not raped as she claims.

4. Aisha told her she can’t do such because it’s a lie.
5. This is another way Patrick is trying to get back at Peruzzi

Let me just stop her before I chop another slap

Following the witness coming out to denies the incident, Princess had this to say about her so-called friend.

I always knew you were the type of person to pick a celebrity over a friend.
Thank God I got you on record corroborating my story!#NoFakeFriends #SayNoToRapist #SurvivingPeruzzi pic.twitter.com/NqCTDSpX0f

When daffy blanco spoke out, y’all thought she was joking. #SurvivingPeruzzi #SayNoToRapisthttps://t.co/TQImnKOTVX

D’banj Signed Biggest Deal Any Artists Ever Signed With Any Commercial Bank, But What Bank Is That? Find Out Here….