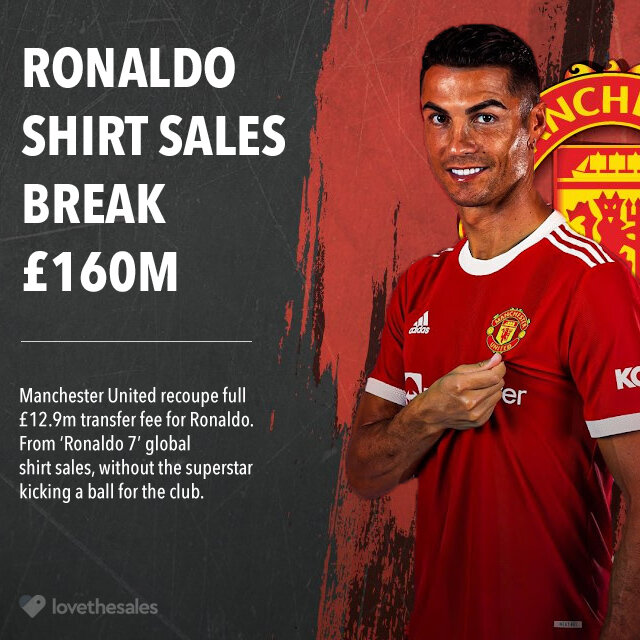 Following the announcement of Cristiano Ronaldo as the newest Manchester United player about a few days ago, the English club has hit a ridiculous £187 million in shirt sales.

The Five Times FIFA World Best Player and Ballon d’Or winner Cristiano Ronaldo signed a lucrative two-year contract with Manchester United and he’s once again wearing the iconic No.7 on his back, with Edinson Cavani leaving the jersey No.7 for No.21.

According to several reports, Manchester United agreed to paid least £12.9 million to bring him back to the place where he started his career for six glorious years between 2003and 2009 before he comes the world’s global superstar of today.

With the situation on the ground now, it looks like Manchester United has gradually becoming to reap from their investment of bringing Ronaldo back to the club. Away from the incredible social media impression and engagement, they have attracted in the last few days, Ronaldo is responsible for the fastest-selling shirt in the history of the Premier League.

According to data gathered by Lovethesales.com on Ronaldo’s United shirt sales, which has netted the club £13.1 million in revenue. Looking at data from sales figures across more than 1000 global retailers, they found that online searches for the ‘Ronaldo 7 shirt’ increased by 600% and as a result, a quarter of official kit merchandisers have currently sold out – or are close to – selling out of Manchester United shirts.

Stuart McClure, the co-founder of shopping marketplace LovetheSales.com, commented on the sales data, “We are tracking record-breaking sales of ‘Ronaldo 7’ kits across online retailers, to the point where demand is now outweighing supply.

Online searches for the ‘Ronaldo 7’ shirt have increased by over 600%, compared to last summer. This is proving to be the signing of the summer for Manchester United. Not only has Ronaldo smashed the record for the fastest-selling shirt in Premier League history but has netted Man United £13.1m in shirt sale revenue.”