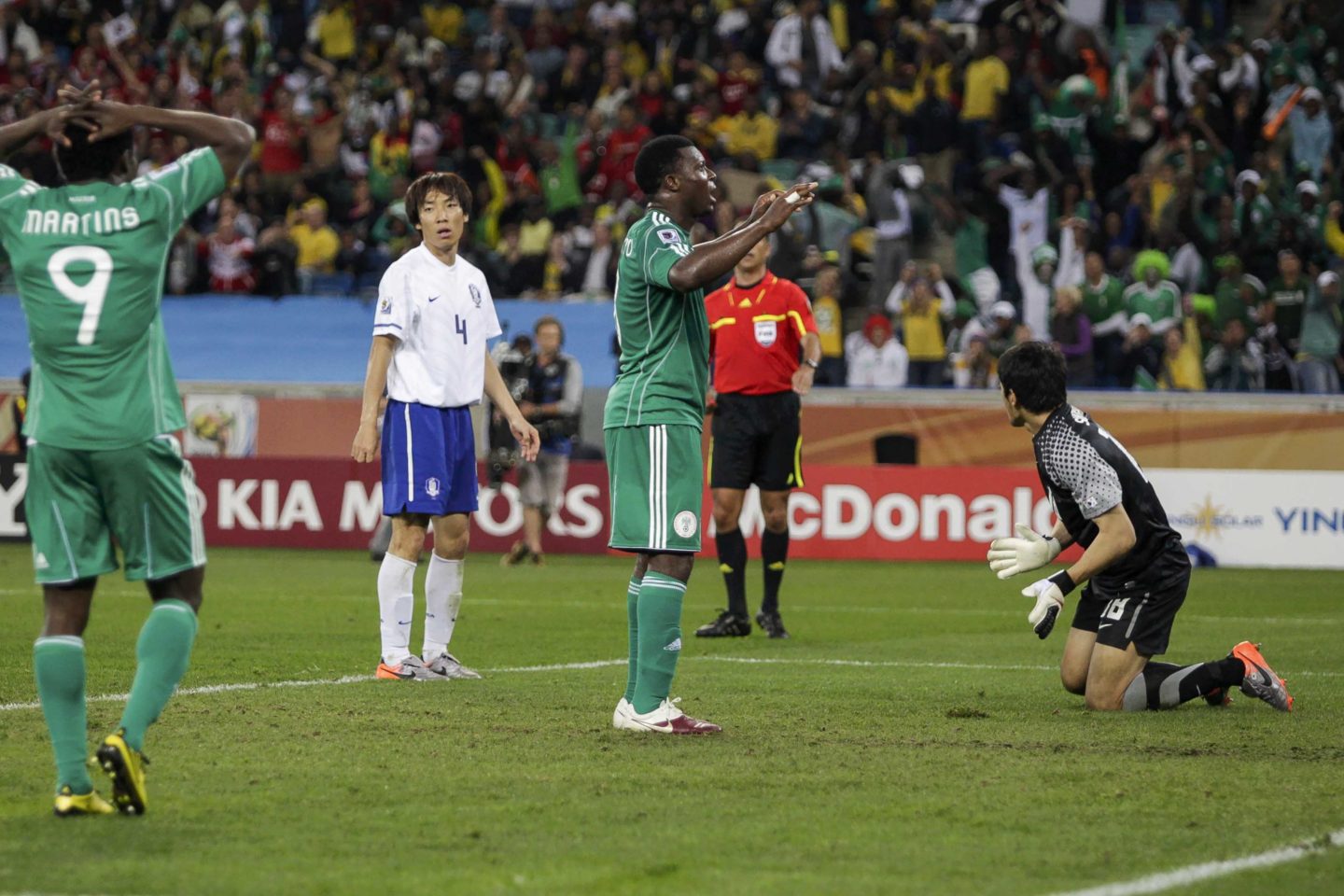 Former Nigeria’s international Yakubu missed a vital moment that could have taken the Super Eagles of Nigeria into the next stage of the tournament, the sort of chance he would “usually score with (his) eyes closed”. But on that fateful day in Durban, it was a smash miss from Aiyegbeni, and that miss overshadowed his illustrious goal-scoring greatness.

That day, Yakubu was seen on cameras with a wan smile on his face and chewing gum. “Inside, I was dying and asking myself, ‘But how?’” he said. “What really happened? I was in a state of abject shock.”

From that moment till today, Aiyegbeni becomes public enemy number one for Nigerian football lovers and has dogged him ever since, both in-person and online. In an exclusive interview with Nigerian football journalist Oluwashina Okeleji, Yakubu Aiyegbeni speaks on the Unforgettable moment, and how he’s dealing with both online and offline insults and abuse.

“In Nigeria, they continue to speak about my miss,” he said. “Imagine, just this morning I’ve received three messages on social media about that miss in 2010. And it’s just 2.10 pm UK time!

“The truth is that I receive messages like that every day from different people, especially the young ones who don’t really understand life or football. Sometimes in Lagos, the same people online will run after me, greet me, and say, ‘Oh yes you missed that goal.’ They still bring back something that is in the past. Even sometimes when I try eating in restaurants and they go on about it, I just need to tell them, ‘Please, let’s all eat and go home, we can’t be talking about 11 years ago.’

“I’ve received threats and sometimes very strong ones, too. Some will write and say, ‘You’re still laughing like you did back then.’ I think if you want to threaten me you need to do it to my face. Some of those hiding behind computers to say stuff to me can’t even stand in front of me.

Shockingly, then Nigeria captain Nwankwo Kanu openly criticised Aiyegbeni after the game. “As a striker that’s the easiest one to score, so if you miss it then I don’t know what you will do,” Kanu said. “If we didn’t create the chances we’d complain, but in fact we made them.”

While former England international striker Alan Shearer said on the BBC: “I reckon that’s the worst miss I’ve ever seen.”

Part of the reason Aiyegbeni finds the criticism particularly difficult to accept is the apparent unfairness of it. Despite his goal return and the acclaim, he receives in England for his exploits, back home his legacy and years of selfless service have been watered down severely on account of that single, unfortunate moment.

The 38-year-old has sought to challenge this by going on the offensive, disputing the idea he has anything to apologise for, and insisting his career should be considered more holistically.

“People don’t understand some of the sacrifices we made to play for Nigeria,” he says.

“It reminds me of the trip to war-torn Sierra Leone for a World Cup qualifier [in 2000]. They were still involved in the civil war. We took the risk to play because of the love we have for the country. Even when we were scared. That trip to Freetown is unforgettable because it involved a helicopter. It could only take nine players. It was a crazy journey, but we did all that because of the love.

“But here we are, and some people are still talking about one miss. I think about the trip to Sudan [in 2001] when no one gave us a chance; but we won 4-0 away at a tough ground. For the 2002 World Cup, I scored the goals to qualify us, only to be dropped for the tournament proper. Does anyone apologise for that? No, it must be that miss.

“How can they forget that you scored amazing, incredible goals? I’ve scored a lot of important goals so why bother about one that I missed? No one has thanked me for all the goals I scored for Nigeria, and no one remembers that I still scored 17 goals for Blackburn a year after [that miss]. It’s like doing good to someone, the day you’re unable to do what they expect you to do, they make you into a bad person. It’s crazy and very annoying.”

Beyond simply ensuring he is remembered in the proper light, Aiyegbeni is keen to insulate his family and protect his own mental health. His children are old enough now that they can understand the situation, and they find it amusing to rewatch that moment on YouTube. Inside the home, it is a source of many guffaws.

“My kids, especially my daughters, they watch my goals on YouTube,” Aiyegbeni said. “But whenever they see that miss, I become the butt of the joke. The last one – Katty – will say, ‘What? How did you miss that, Daddy?’ My friends and loved ones, we all laugh about that miss all the time.”

His family has suffered no overt bullying on his account, but the thought of that is an obvious source of concern and is part of the toll footballers suffer with regard to their emotional and psychological health. Aiyegbeni’s hard-knocks upbringing on the streets of Benin City, Edo State, where he faced “harder guys than these online trolls and abusers” has given him a thick skin.

However, he believes people hide behind the criticism to mask their own insecurities and should be more conscious of the impact these comments have on professional athletes.

“In Benin where I grew up it was a lot tougher, so why should stuff they say about a missed goal give me depression and anguish? They don’t compare to what I’ve dealt with growing up in life,” he said.

“Of course, I felt bad about it but it’s all part of football. It happens to the best footballers. You need to let go. If what people say to you gets to you then you have allowed one person or incident to define your life in their own words.

“When you miss a glorious chance and people still talk about it over a decade after, it makes you look like the bad person in your own life story. Some say, ‘We will never forgive you.’ Who are you to forgive? You need to first focus on the things frustrating you in your life. I refuse to be the bad person or a man defined by a miss.

The truth is that I’ve scored more goals for Nigeria, scored at the Nations Cup, the World Cup, and for my club sides as well. You can’t take that away from me. Some players played international football and never scored at the World Cup. I am proud of what I achieved in my career and life.”

For those with similar experiences, Aiyegbeni has sympathy, but also important advice.

“Most players would get depressed about stuff like this,” he said. “When you think of the vile insults – verbal and online abuse – it’s sad, but you just need to be strong. When things like this happen to you, always focus on yourself. Find positives from the other games you’ve played, and goals scored in your career. You cannot let one bad day ruin your entire career or get you upset.

“Some people can break and just give in to the trolls and online bullies, some might go to the extreme and shut things down to stop the noise. But not me. I remain one of my country’s all-time leading scorers, and that is what I am, not someone who will be reduced to mockery. “2010 is in my past. For those who want to live in the past, they can remain stagnant. That is their problem, not mine.”

From the unforgettable highs, such as scoring twice for a 4-0 win away to Sudan in a World Cup qualifier and sitting fifth on the list of all-time African goalscorers in the Premier League with 95 goals, to the despairing lows, when he ruptured his achilles in November 2008 – Aiyegbeni is standing tall.

“On the list of African leading scorers in the Premier League, you now count [Mohamed] Salah, Didier Drogba, Sadio Mane, and Adebayor and who? Yakubu, exactly. Remember, these guys even played for clubs competing for the titles. I was out for over a year in England because of an injury.

Yet I got those numbers. I am always proud of myself. My family is proud of me. And those who are smart and honest enough will understand that there is more to Yakubu than a miss at the World Cup.”