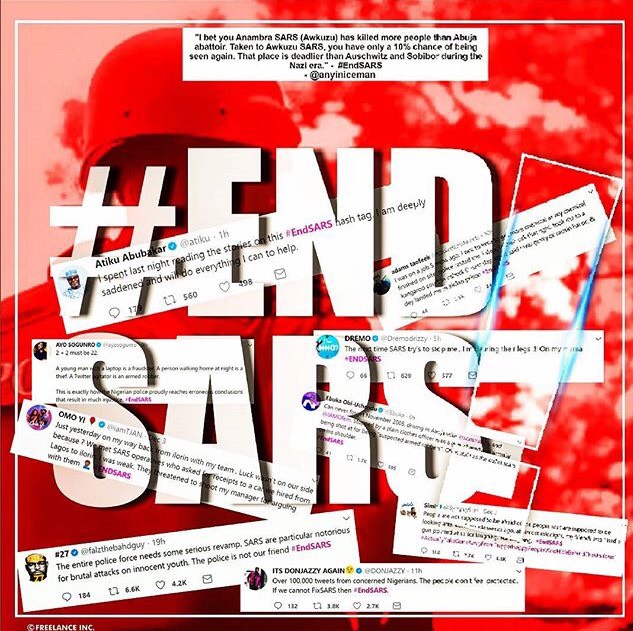 Following the outcry of unprofessional approaches by SARS over innocent Nigerians that has emerged on social media, several celebrities have joined the campaign to #EndSARS .

The #EndSARS hashtag has been trending on Nigerian social media for days now, it was recorded to have received over 100,000 tweets response from Nigerians. The #EndSARS hashtag was used to call for the disbandment of a police unit called Special Anti-Robbery Squad (SARS).

#EndSARS : How Nigerian Celebrities Lend Their Voice to the Brutality Activities of SARS

The #EndSARS hashtag was used reveal some of the harrowing experiences they have had in the hand of this so called policemen. Several celebrities have also spoken on the issue also using the opportunity to share their meetings with SARS operatives.

See other posts of celebs below:

#EndSarsBrutality plenty suffer man de face. Guide and protect the people not make life miserable for them due to the pressure that comes with your work or what you going through at home. A man with gun should be mentally balance and well oriented 🇳🇬

The entire police force needs some serious revamp. SARS are particular notorious for brutal attacks on innocent youth. The police is not our friend #EndSARS

I recall my encounter with some #Sars members on my trip to perform In Benin. Our car was stopped and we’re seriously embarrassed for dressing well. They took us to their station and we had to bail ourselves. #ENDSars #ScrapSARS

I have had my own share of the SARS menace. It is high time this harassment stopped. Our voices must be heard. #EndSARS

I have experienced the brutality from some power drunk #SARS police officials as well. Hoping the govt can act swiftly on this one.

I’ll never understand why a police officer will forcefully arrest you and take you to the nearest atm to withdraw your money for them. Robbery!

People are not supposed to be afraid of the people that are supposed to be looking after us. A couple weeks ago, at almost midnight, my friends and I had a gun pointed at us for laughing. For laughing. #EndSARS #ActuallyTakeGunsAwayFromTriggerHappyPeopleWhoHideBehindTheUniform!

Their boss had to talk him down! Pointing a gun at 3 ladies because of your insecurities is incredibly frightening! Policemen need to be mentally evaluated and checked before being handed guns. And they need to be accountable!! Otherwise, they can get away with anything. #EndSARS

Somebody sent me DM to learn my voice to the SARS menace. #EndSARS now. Hmmmm. If only they knew I had my own story. My life is more endangered than yours with them. My story …….

A painter and an AC repairer had come to work in my house and I gave them money to go and buy materials. I waited and they weren't showing any sign of coming so I called, only to be told they had been held by SARS. I took my car and went to the place. #ENDSARS

I got there. These guys have been stripped and their hands tied behind their back. I thought I was known and demanded to see the SUPERIOR OFFICER who was smoking IGBO and drinking with others. Only to be threatened to be shot if I don't move back. Yeepa. #EndSARS

I went back to the truck to speak with the arrested guys what their offence was and they said, they were on a bike and were stopped by SARS who told them they were riding pass a crime scene so they were suspects. Reallyyyy!!! #ENDSARS

I went back to the SARS guys and they said they weren't ready to talk to me until they get to their station. I drove behind to the station and the SARS guys disappeared and the case was being handled by another person entirely. #ENDSARS

After so many back and forth, I got angry and lost my temper demanding what the guys did and instantly they had labelled thieves and that I would only bail them with 100k each. I started making calls. #ENDSARS

I called the then Lagos PPRO, no response but I got ALEEYU GIWA who started calling, but no superior officer was on seat. I walked to CPA's office reported and he asked the boss to write reports and be realeased immediately. #ENDSARS

I went back downstairs and the money demand continued so I went back to the CPA and he asked me to call the guy in charge, but the middle man demanding the money on their behalf disappeared and then trouble. #ENDSARS

The CPA asked the guy in charge and he said, did ever demand money from me directly? I said No but your guy did and CPA got angry. That's how you people spoil the name of the Police. Get out! Go and release the boys. Let him leave. #ENDSARS

We got back downstairs. The guy in charge demanded for 20k with a threat. If you like go back to Oga, one day you go just finish performance. We go just shoot you die, put gun sey you thief. How do I go back to the CPA? #ENDSARS

I asked myself what if these guys weren't working for me that day. That is how their future could have been jeopardized and they will be labelled criminals for crimes they had no idea happened. Beaten and stripped. #ENDSARS.

I was glad, I could help, but what of the many that never got help and will never get. Let's speak for them now. Reform SARS or scrap SARS. #ENDSARS. Join the conversation. Thanks.

Over 100,000 tweets from concerned Nigerians. The people don’t feel protected. If we cannot FixSARS then #EndSARS.

Not only end SARS, end the Police & raise New ones with a higher level of education & IQ. The lack in that area is alarming #EndSARS

About 200 Fans Reportedly Turn Up for Wizkid’s Concert in Botswana
FlyBoi Inc Is Illegal! Kiss Daniel Drags to Court by G-Worldwide Entertainment Over Breach Of Contract
Advertisement