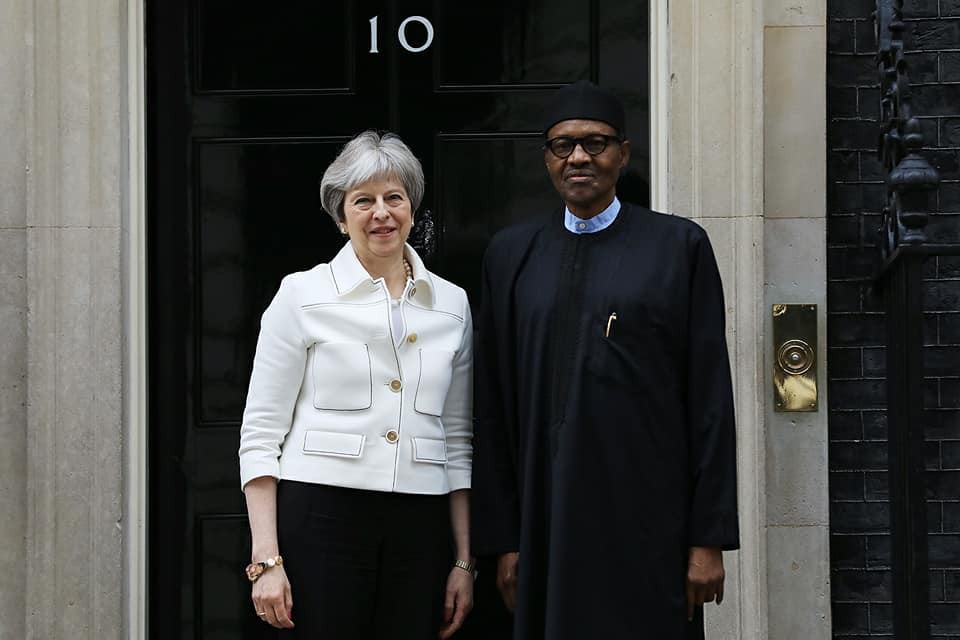 Early today, Nigeria’s President Muhammadu Buhari was welcomed at the iconic 10, Downing Street, London, for a bilateral meeting with the British Prime Minister, Theresa May.

However, a viral video and pictures of them together surfaced online, whereby President Buhari said that his focus now is not the forthcoming election but how he can enhance the security and economy of Nigeria.

At the end of his bilateral meeting with Prime Minister, @Theresa_May, President @MBuhari thanked her for Britain’s efforts at the training of the Nigerian Armed forces in fighting Boko Haram. pic.twitter.com/4vMRZk8whd

“We campaigned on three major issues, to secure the country, revive the economy and fight corruption,” said the President. “We have elections next year, politicians are already preoccupied with the polls, but I am bothered more about security and the economy,” he stressed.

Recalling that Nigeria and Britain have a long history of cooperation on several fronts, President Buhari stated: “People ought to know how they arrived where they are if they would move forward. It was a mistake for us to have stopped the teaching of history as a subject in schools, but we are returning it to the curriculum now.”

He commended British companies like Unilever, Cadbury, and many others, “who have stood with Nigeria through thick and thin. Even when we fought a Civil War, they never left.

“But like Oliver Twist, we ask for more investments. We are encouraging more British companies to come to Nigeria. We appreciate the support you have given in training and equipping our military, particularly in the war against insurgency, but we want to also continue to work with you on trade and investment.”

” I Don’t Focus On Next Election Like Other Politicians, But Am Only Bothered About Security And The Economy ” – President Buhari Tells UK Prime Minister, Theresa May

President Buhari briefed Prime Minister May on the strides in agriculture, which he said has put Nigeria firmly on the road to food self-sufficiency.

“I am very pleased with the successes in agriculture,” he said, adding: “We have cut rice importation by about 90%, made lots of savings of foreign exchange, and generated employment. People had rushed to the cities to get oil money, at the expense of farming. But luckily, they are now going back to the farms. Even professionals are going back to the land. We are making steady progress on the road to food security.”

On education, President Buhari said more investment was being made, because “people can look after themselves if well educated. In this age of technology, education is very important. We need well-staffed and well-equipped institutions to move into the next generation.”

Climate change and environmental issues also came up for discussion, and President Buhari brought up the necessity of inter-basin water transfer from Congo Basin to Lake Chad.

According to him: “The Lake Chad is now about 10% of its original size, and it is perhaps one of the reasons our youths dare both the Sahara Desert and the Mediterranean, to get to Europe. But if there is inter-basin water transfer, about 40 million people in Nigeria, Niger, Cameroon, Chad, and other countries stand to benefit. I made the case during the Climate Change Summit in France. If Lake Chad is recharged, it will reduce the number of youths coming to Europe to increase social problems. We brought back about 4,000 people from Libya recently. Almost all of them were below 30, and Libya was not their final destination. They were headed to Europe.”

The Prime Minister said the Buhari administration has “been making good progress on the economy,” and urged it to maintain the focus, despite approaching elections and increase in political activities.

Prime Minister May, who commended President Buhari for the much he has been doing on improving trade and business for Nigeria, noted that it was also time to boost intra-Commonwealth trade.