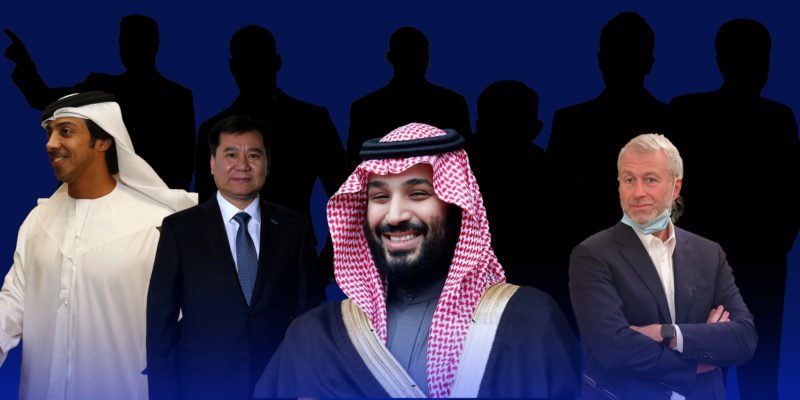 Over the past few years, the world’s footballing industry has become an elite-based lucrative business for club owners with billions in revenue sloshing around clubs with recurring broadcasting contracts and corporate sponsorship deals that are coming in.

Well as the money coming in, success in football has brought with it prestige and it is also a very reliable way to elicit goodwill from the public at large. So it is no surprise that the game has become an attractive investment prospect for many millionaires and billionaires across the world.

Football has seen many big-spending clubs and their owners splurging huge sums of money in the acquisition of great players to reinforce their respective clubs, with the hopes of building a competitive team for big competitions such as the UEFA Champions League. However, such lucrative sponsorships and transforming the club into one of the wealthiest clubs in football. With this, we will take a look at the top 10 richest football club owners currently.

The recent takeover of Newcastle United by a Saudi Arabia-backed consortium made headlines in front of several global media networks with a whopping of £305 million to buy a stake from the previous owner, Mike Ashley., making them among the top 10 richest football club owners in the world ahead of fellow Arab oil money backed clubs such as Manchester City & Paris Saint Germain, (PSG).

The Newcastle United acquisition takeover by Saudi Arabia-backed Public Investment Fund means that they’re owning 80 percent of Newcastle United, while Amanda Staveley and Reuben brothers own 10 percent respectively. However, here’s what Amanda has to say about the acquisition of the club, “Newcastle United deserves to be top of the Premier League. We want to get there. It will take time, but we will get there.”

Guo Guangchang is the 45th richest person in China, according to Hurun Report’s 2019 China Rich List. He is a businessman and an investor who is worth £5.2bn. The chairman and co-founder of Fosun International Limited took over Wolverhampton Wanderers in July 2016, becoming one of the richest club owners in football.

Serie A defending champions Inter Milan also have Chinese ownership. The club is owned by Zhang Jindong who is reportedly worth £6.2bn. The entrepreneur is one of the founders and the current honorary chairman of Suning.com. He took over Inter Milan in June 2016 after his private firm Suning Holdings bought 70% of the club’s shares for $300 million.

Arsenal’s owner Stan Kroenke may get accusations of not spending enough money on the club, but it’s definitely not because of the lack of it. The American billionaire businessman is worth £6.8bn, making him one of the richest owners in world football. Kroenke owns the club through his company Kroenke Sports & Entertainment. He became a shareholder in May 2007 and became the majority shareholder of Arsenal Football Club in April 2011.

Philip Anschutz is an American businessman who has built fortunes in oil, railroads, telecom, real estate, and entertainment. He is the owner of majority stakes in the Major League Soccer club LA Galaxy, making him one of the richest club owners in world football. Anschutz bought Los Angeles Galaxy for $26 million in 1998 and is worth £8.1bn himself today.

Roman Abramovich is one of the more popular club owners in England who regularly watches Chelsea FC in action. Abramovich purchased Chelsea in July 2003 for reportedly £140m followings which, the club saw a lot of success. The Russian is worth £10.5bn now and is one of the richest owners in world football.

The chairman of Italian giants, Juventus – Andrea Agnelli is understood to have a net worth of £14bn. The Italian has been a regular presence when it comes to Italian football, with him taking the club to greater heights in the recent past.

Dietrich Mateschitz is an Austrian businessman who is the co-founder and 49% owner of the Red Bull energy drink company, which owns RB Leipzig and RB Salzburg. Mateschitz is understood to have a net worth of £15.7bn.

Sheikh Mansour is the owner of the Abu Dhabi United Group which owns not only Manchester City but also Melbourne City FC, New York City FC, and Mumbai City FC among others. Sheikh Mansour is reportedly worth £21bn and has been immensely successful in making City a global brand.

Qatar Investment Authority who are the owners of Paris Saint-Germain is headed by a chairman, Nasser Al-Khelaifi who is the president of the club and also the Chief Executive Officer (CEO) of beIN Sports. The QIS are reportedly worth £220bn, making them the second richest owners in the world.

Headed by Saudi Arabia’s Crown Prince Mohammed bin Salman who is understood to be worth £320bn – which makes him the richest football club owner in the world, The Crown Prince is only 36-years-old and has been the Crown prince of Saudi Arabia since 2017.