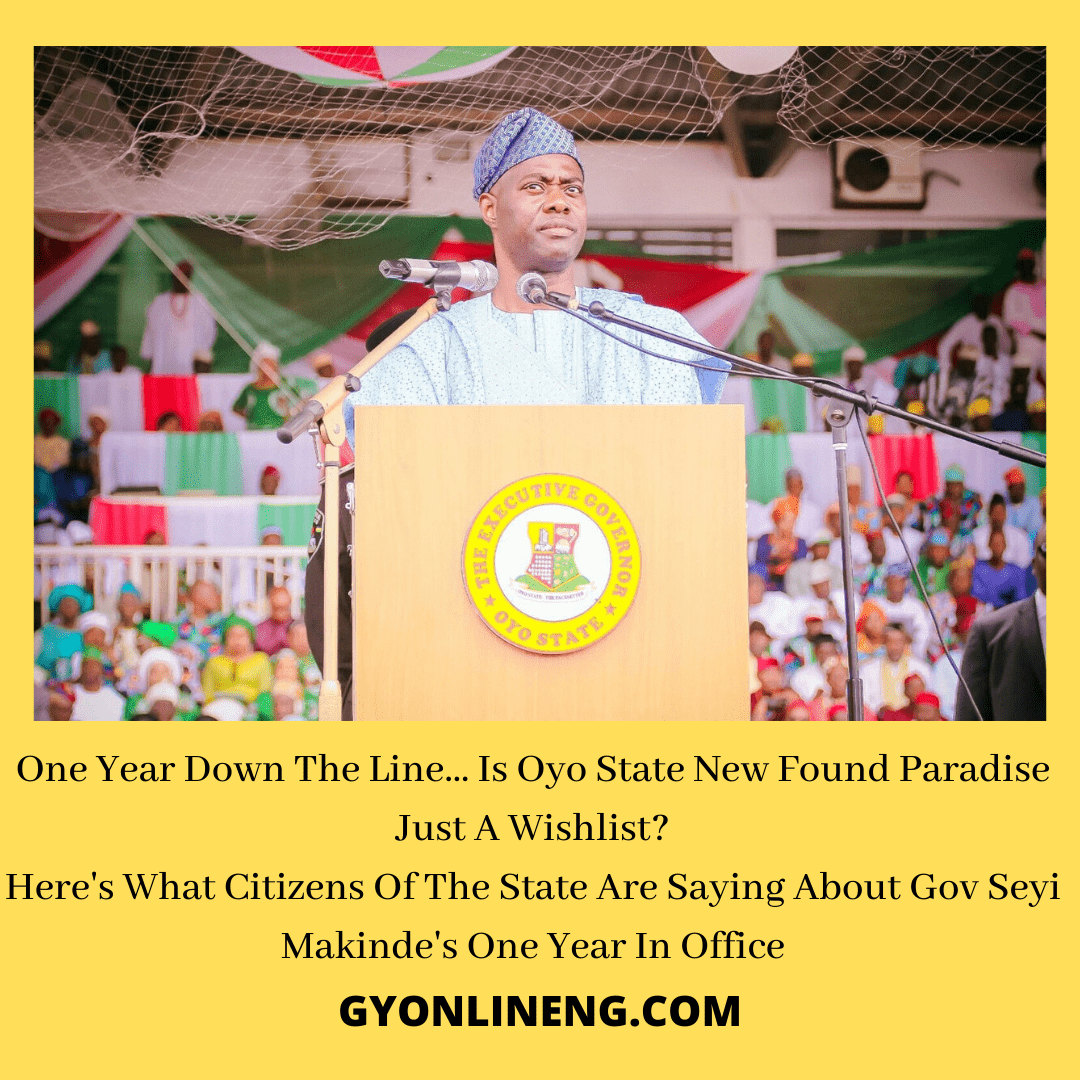 The elections are over but the memories never fade especially the day that saw Governor Seyi Makinde take over the mantle of leadership for the state at the Lekan Salami Adamasingba Stadium, the ambience of the state is electric yet peaceful and full of unending praise-singing like a people that just got there freedom.

The people broke out in their multitude to sing the praise of their messiah, the transition to a new place that they have been craving for. It’s indeed a moment never to forget and the sounds of drums, singing, joyful noise and celebration attest to it.

Looking forward to here, there are very obvious herculean tasks that must be at the forefront of the agenda of this messianic movement.

*Education: There is a need for restoration in the education sector of the state, citing the fact that the state is lagging behind here.

*Economy: There is a need to revamp the economy of the state so that Oyo state can once again become a key player in the socio-economic field of the nation.

*Agriculture: The west is a champion of the nations food chain and Oyo state needs to lead the pack even as she provides for her citizens and creates job opportunities.

*Security: This is the bedrock of any proper functioning economy, safety guarantees economic breakthrough and must be taken very seriously.

*Health: When the people are failing in their health, the economy comes crashing down and the state is in disarray.

Standing and looking at the newly installed Governor Seyi Makinde from afar right here in the Lekan Salami Adamasingba Stadium Ibadan, on 29th of May, 2019, and he said some very important things and I quote here:

” I am here as your governor to serve you. I will work tirelessly and take responsibility for the workings of every sector. While I will delegate effectively, the buck will stop with me. I want you to hold me accountable and I will also hold you accountable as we work as partners to bring Oyo State to glory.

We will be a progressive administration; building on the programmes of past administrations that were structured properly and have been beneficial to the masses. When the need arises, we will consult our predecessors and draw on their experiences. We will put aside partisan politics for the good of our state.

We will bring in new ideas and explore new initiatives. We will partner with local and foreign investors, some of whom are here with us today. ”

Words don’t fade into thin air, they settle into the subconscious canvas, like a fine painting encrypted into the wall.

When the need for it’s connotative and literal interpretations presents itself, the words come back alive even when it has been erased from the canvas and yes, the people are waiting to throw the words back at its the creator.

Words are one of the most viable tools for combat in the political terrain…The once ruling party now turned opposition party has belted out rivalry themed statements even while leaning on the side of public interest to tackle the competence of the Seyi Makinde led administration.

It’s already a year into the new era. The beloved is seated on the throne, the antagonists are throwing faulty stones of questionable gestures, the citizenry is torn into segments. some are reasonably critical with the greater good at heart, some are neutral and sitting on the fence, even there silence is cunningly laced with unassuming stances.

Is this the dream we dreamt?

Is this another sentimental doorway to an already existed destination?

Does this path lead to the promised land?

Is the beloved only being idolized instead of being held to account?

This writer got some real-time commentaries from the citizens of the messianic transitioned Oyo State, take a good look at them. This is what citizens of the state are saying about administration and leadership of Seyi Makinde‘s one year in the office below.

My assessment of Seyi Makinde first year has been fair. It’s indeed new dawn that he promised us in the pacesetter state.

He was able to meet up with some expectations while we hope for more in the coming years because expectations of Oyo State citizens are high.

Governor Makinde has done one major thing different from some past administrations, he has ensured that some of the ongoing projects his administration inherited were reviewed & some were considered for completion, such can only be done by a sincere administration like that of Seyi Makinde.

For now, I think he has been handling the security architecture, workers welfare and education so well.

Hopefully, he puts more actions into infrastructural development in the coming years.

His type of governance is rare in Nigeria which some people have called populism, and he is a Governor that cares about the common folks of Oyo state and he implements only policies that benefit the state people.

In everything, he has done. His government is inclusive of the people and by also not leaving any stone unturned. He’s making sure he completes all outstanding and neglected projects by the past administration of Senator Abiola Ajimobi.

In all fairness, he has been inconsistent in his approach, much like a leader without a blueprint for navigation and leadership. His awareness of public relations is strictly hinged on media propaganda, served on a platform for maligning the public view on progress report and development.

His philanthropic efforts before the election are unparalleled but his leadership tenet in government is lowly rated and had been a determinant of the poor organizational skill of HE. The last one year has been a brilliantly detailed storyline of a leader who is also ready to destroy the legacy of the past administration of Ajimobi and build on the reputation of a leader of the people, little wonder he’s referred to as the audio governor.

Politics is more than selling Impossible for the media. Governance is continuum if in the media or open you diminish your predecessor’s policies and achievements but make a u-turn in the private to glorify such and use such it reduces your quality.

Seyi Makinde receives an award of Education excellence made achievable from the OYEMESI, cancels SGB in public but embraces these in secret.

He is a good guy but the politician in him is like Adedibu. There is no single road construction in the metropolis. The one that is ongoing he is not putting much weight cos the roads have been named. The health sector is in shamble as he has not enforced or publicised the state health insurance scheme. He cancels the project to increase PHC in every ward.

He gave executive power to a known thug. He has borrowed almost half his predecessor borrowed in 8 years in 11 months. SUBEB project award in 2018, he lay claim to it. He didn’t mention they were an ongoing project he ensured they were completed. That’s a politician, not a leader.

This comment is coming from Comrade Yusuf Adebayo Adams.

Actually Seyi is not doing well, he has taken the state backwards. We have not witnessed tremendous growth in the last 365-days of his administration. In fact no sincere and true policy from the Executive arms of the government. Overall I scored him 25%, which is equivalent to F9, and he can do better next year.

Continue Reading
Advertisement
You may also like...
Related Topics:Seyi Makinde

Kiddominant Speaks With Apple Music On His Transitioning From Producer to Artist, New Single ” eWallet ” With Cassper Nyovest And More
Joeboy Opens Up On How He Met Mr Eazi
Advertisement