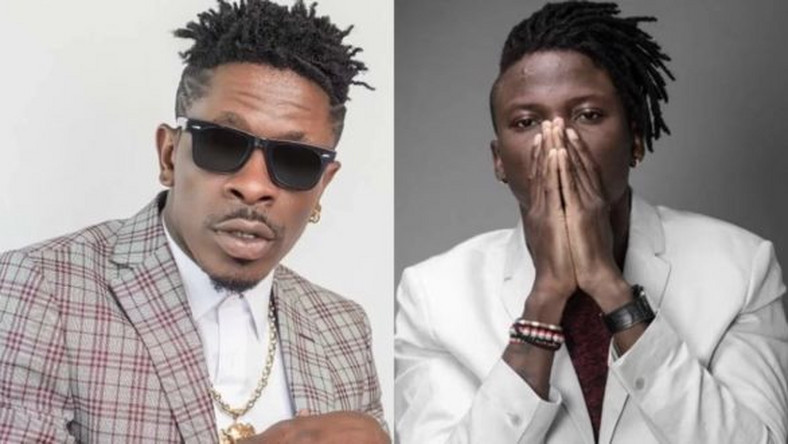 The 20th edition of Vodafone Ghana Music Awards 2019, was a successful event yesterday until that moment when Ghanaian Dancehall artiste Shatta Wale & his entourage causes a commotion by rushing on stage while Stonebwoy was on stage receiving an award for ”Reggae/Dancehall Artiste of the Year”.

The unending fracas between Stonebwoy and Shatta Wale was another national disgrace for the Ghanaian Music Industry, as Shatta Wale disrupted the award ceremony because it’s not favoring, while Stonebwoy reportedly pulled out a gun on stage.

However, Shatta Wale intention of rushing to the stage yesterday, considering the fact that both him and Stonebwoy hardly seen each other eye to eye in the past few years.

📍[VIDEO] The lead-up to the entire scuffle between followers of Shatta Wale and Stonebwoy. #TV3GH #VGMAonTV3 pic.twitter.com/P73BfJWAYa

📍How the never-ending turf war between Shatta Wale and Stonebwoy started and escalated at this years’ Vodafone Ghana Music Award #VGMAonTV3 #VGMA20 pic.twitter.com/Zgzld6O8cb

Following the brawl at the 20th edition of Ghana Music Awards, Dancehall artiste Stonebwoy has rendered an unqualified apology to patrons of the award ceremony and Ghanaians people at large for pulling out a gun on stage.

📍”The way he [Shatta Wale] is behaving, he wishes death unto this country. He is inviting a fight… and I will chew him like gari!” – Stonebwoy #VGMAonTV3 #VGMA20 pic.twitter.com/lc9MAvepr9

Shatta Wale took to his social media to reacts to his unending fight with Stonebwoy at the VGMA held last night stated that one should play with a lion.

We have made Shatta Wale a demigod and he does whatever he pleases. Such nonsense#VGMA20

Don’t play with a lion like that …He dislikes to smell blood !!!

You pull out Gun on innocent people ..Ghana police do your work !!
😂🤣🤣🤣
This is called insecurity …it’s a shame Ghana music supports this arrogant cripple !!

Imagine as you commot ,I commot ,what you feel say you cause.cuz I was told by the Law that until someone threatens to kill me with gun ,I should not take mine out …Ghana police do your work well I beg waaa cuz now sef people come give warning shots around my house

You no get leg to run but you are causing panic in public and everybody go run leave u if that shit happens ..Even you manager won’t stand by u …he will run 🏃🏾‍♀️🏃🏾‍♀️🏃🏾‍♀️🏃🏾‍♀️🏃🏾‍♀️

If Gh police don’t show you how to handle a gun erh . it will be nice when I meet u paa.cuz I don’t take gun out and pose.I shoot.Fool !!! Let your fans make u feel gangsta with that one leg .. it’s a disgrace I brought that demon in you for the world to see you are not an angel

Guess Who Cristiano Ronaldo Advice Juventus Directors To Appoint As Next Manager, Following Departure of Massimiliano Allegri
Is Naira Marley Going to Jail? Court Orders Remand Of Naira Marley In Prison, Mother Bursts Into Tears On Seeing Him & Many Others In Court Today
Advertisement